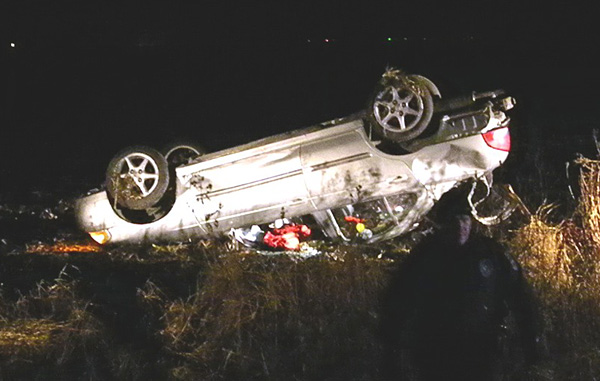 At about 3:45 AM, Mason City police and Cerro Gordo County sheriff’s deputies were in search of a single vehicle rollover. It was reported the girlfriend of the driver of the car, Alex Meyer, 21, had received a call saying he was in an accident and stuck in his vehicle. His phone then went dead.

With the little information that was given by the caller, it took authorities only about 10-15 minutes to find the scene of the accident. Meyer’s car had rolled over into a cornfield on 285th Street, close to Killdeer Avenue.

Meyer’s mother, who was at the scene of the accident said, “We were scared, his phone went dead and we didn’t know where he was. He couldn’t get his seat belt off and he was stuck. He’s okay though.”

The contents of the car were lying, scattered in the ditch. A Mason City Police officer, Mike Lillquist, was rounding up all his belongs.

“I asked if I could get his tools,” said his mother “He needs them for school.” Officer Lillquist informed her it was okay to take what she wanted.

Meyer was arrested by Cerro Gordo County sheriff’s deputies after a sobriety test and according to online reports, charged with OWI 1st offense, failure to maintain control, speeding, and no insurance.