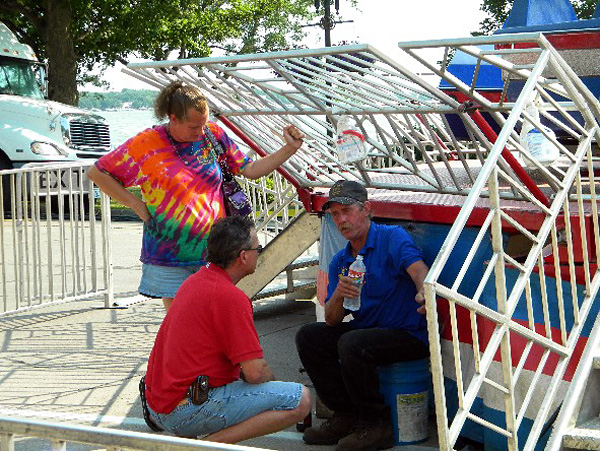 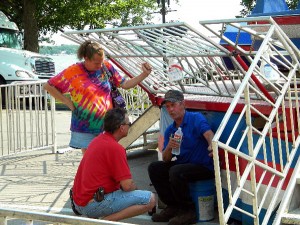 CLEAR LAKE – At approximately 4:10 pm, Monday, a 911 call had emergency crews dispatched to the Clear Lake seawall area. Three people had apparently fallen out of the “Hurricane” ride and it was reported that the ride had ran over one females knee.

(PHOTO: Operator of the “Hurricane” ride is questioned on Monday after an accident.)

At the scene, the Clear Lake Fire Department and Ambulance and Clear Lake/Ventura Police Department were there helping one of the people hurt by the ride. Another person had already been taken by ambulance to Mercy Medical Hospital in Mason City.

A male, overheard being called Tyrone, said, “We were trying to get off the ride, the guy was putting people on. He didn’t pay attention that we didn’t make it all the way around the platform and down the stairs. We didn’t get half way around before he started the ride back up. The ride smacking us, pushing us out, pushing us further on the platform and up over the railing. It’s about five, six foot to the concrete. My girlfriend landed on her head.” (see video for more)

A Clear Lake Police officer brought him over an ice pack and offered to drive them to their car so they didn’t have to walk.

(PHOTO: Clear Lake Fire and Rescue tend to an injured person Monday after an accident on a carnival ride.) 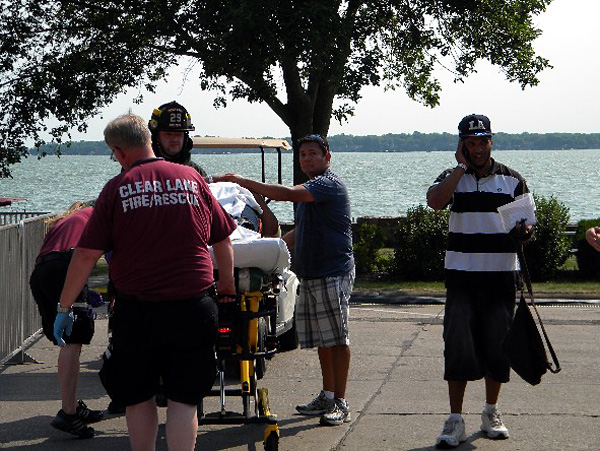