What a Night for Larry Portis at the I-35 Speedway 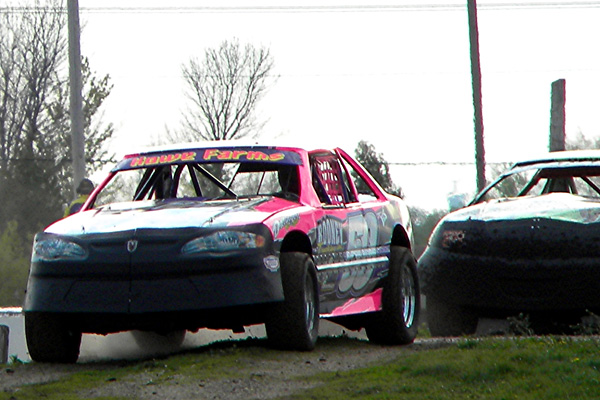 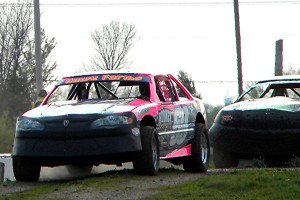 MASON CITY – There was a great turnout for the I-35 Speedway Sunday night; many cars from all over Iowa and Minnesota. Because of rain cancellations from last weeks races, the stock car and modifieds held a double Sunday night.

The stock cars only had the last couple crucial laps to finish, with Larry Portis keeping his lead from last week, coming out the winner. Not only did he win the feature race from last week, he also took first place in this weeks’ feature. With his hot pink #59 car and his experience behind the wheel, he put a great show on. Most of the race he was between 5th, 6th or 7th place…coming out a winner in the end. What a night for Portis.

Kyle Germundson was on fire. Not literally. Last week winning his heat, his car was unstoppable. Something happened between the races and the timing went out. For the Sports Mod racer, that made a busy week of getting his car back in top shape. “We were busy all week, working late into the night, including Saturday night and part of Sunday afternoon. But we got it.

Germundson was in the lead for most of the race, battling Travis Greenfield to keep that lead. Adam Ackerman, out of blue, coming to the end of race, took a chance and blew past them for the win. Germundson came in second and Greenfield was third.

The last three feature races showed the worse accidents of the night, with the drivers coming to a complete stop. With Brandon Toftee rolling his Sports Mod and Travis Prochaska doing the same, with his Stock Car, in the very next race. A fan was overheard saying, “He rolled eight times!!” Whether or not it was eight times is not known.

As though that wasn’t enough, the last feature, the Modified driver, James Slawson, hit the same turn and had the same bad luck as the rest. Nobody was seriously hurt in any of the unfortunate accidents.

Levi Nielson, Modified driver of car #45, car broke down during the hotlaps last week said, “The car was ready by feature time last week, but we’re glad to be able to race tonight. We weren’t too sure, with the amount of rain that causes trouble on the track. That’s what caused the breakdown last week. We checked it out, the track is fine, we are going to race both the features tonight.”

Heath Tulp has had a great beginning to the 2012 Racing Season at the I-35 Speedway, bringing in his second win.

Ken Winkowitsch, car #1S driver for Hornets, was having a great race, out in front and neck and neck with Ryan Bryant when going into turn four of mid feature. Winkowitsch, hit some back luck, lost control, and was out of the race.

Here is a link for more pictures to view at Jody and Kelly’s I-35 Speedway Photo Folder. Enjoy! (More are being added all the time, keep checking, and many are for sale.)