This news story was published on March 30, 2012.
Advertise on NIT • Subscribe to NIT 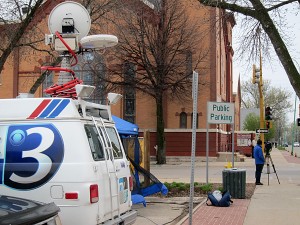 Today your local media sunk to the lowest depths I have ever witnessed.

KIMT, The Globe Gazette and other regional news outlets camped outside Gretchen Crooks’ funeral this afternoon.  They pitched a tent right off of Delaware Avenue across from First Congregational United Church of Christ, hooked up audio feeds and pointed cameras and interviewed mourners.  They went inside the church to get a close-up view of their story and write about the horror and sadness of family and friends of Gretchen.

These news outlets have taken a terrible tragedy and sensationalized it.  They have taken a 13-year-old boy’s name and picture and plastered it all over their news stories.  They have written about and elaborated on charges brought against this child.  He has had zero chance to defend himself.  Forget about juvenile charges, the media has made sure everyone knows it was him.

Gretchen was not a fallen war hero nor an assassinated President; she was simply a decent person who met a terrible death.  The news media did not need to be here today.  As one man who walked by so eloquently said: this is “dirty laundry.”

I was so disgusted after KIMT invited NIT to participate, that I decided to go and do a story on the media itself.  I watched the watchers.

I pointed my camera at THEM and I fired some tough questions.  I wasn’t nice about it.  They called the police on me.  I didn’t leave.

Please watch the video below and let me warn you, it isn’t pretty.

235 Responses to Editorial: Watching the watchers