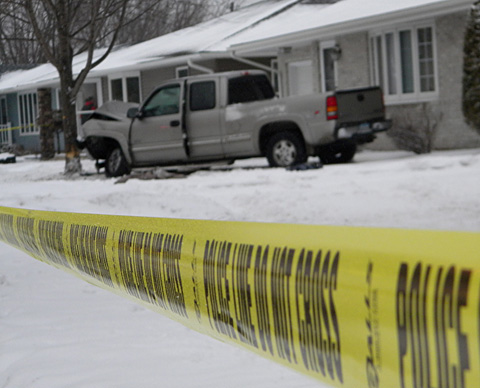 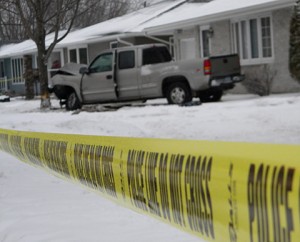 At the scene, the police officers were investigating the incident. A Chevy pick-up truck was apparently heading northwest around the curves of Sunny Circle, and drove up the curve and across a couple yards and ended by hitting a tree.

A resident of the neighborhood said, “He doesn’t live in any of these houses, we don’t know him. He just came around the curve and kept going.”

A male and a female were in the vehicle when it struck a tree.  The female suffered minor injuries.  The driver was identified by Mason City Police as Keith Kock, age 50, of Mason CIty.  The female passenger was identified as Kimberly Swnason, age 47 also of Mason City.  Officers were assisted at the scene by the Mason City Fire Department.  Both subjects were transported to Mercy Medical Center.  The male driver was unconscious and appeared to have suffered a medical emergency prior to the collision.  The condition of the subjects was not available, and the nvestigation is on-going.

No charges are expected at this time.