AMES – No. 18 Iowa State (12-4, 4-2 Big 12) earned back-to-back Big 12 Conference wins with a 64-50 victory over Kansas (13-4, 3-3 Big 12) Saturday evening at Hilton Coliseum. The Cyclones earned their 16th straight victory over the Jayhawks with help from another historic performance from Ashley Joens.

The Cyclones were up by 10 at the half and were able to turn that lead into a 14-point victory. The team drained 12 threes and shot nearly 40% while holding Kansas to two 3-pointers and 34% shooting.

Joens grabbed her eighth double-double of the season with 26 points and 15 rebounds, four of them on the offensive side of the ball.

How it Happened
Kansas started with an early 4-0 run after two quick layups. Donarski ended the Jayhawks run and began the 3-point shootout for the Cyclones. Donarski, Joens and Diew all connected from deep in the first quarter. A late Donarski 3-pointer gave the Cyclones a 15-12 advantage heading into the second quarter.

The Cyclones took control early in the second quarter with a 4-0 run to go up 19-12. Kansas and Iowa State continued to trade field goals before the Jayhawks went on a 5-0 scoring stretch. Donarski cashed in her third 3-pointer of the game to end the four-minute Cyclone scoring drought. Joens was able to knock in two late field goals to give the Cyclones a 31-21 lead entering the break.

Zingaro opened the second half up with a layup and Joens followed with her fourth three-pointer of the contest to go up 36-23. With 1:27 to play in the third, Joens was able to convert a momentum shifting and-one opportunity. Diew closed out the quarter with a trey and Iowa State led 49-34 going into the final 10 minutes.

Joens and Zingaro led the Cyclones in the fourth with five points each. Joens opened the final quarter with a 3-ball to give Iowa State an 18-point lead. Kansas chipped away at the end of the game, but the lead was too much to overcome and the Cyclones held on to a 14-point victory.

Player of the Game
Ashley Joens recorded her eighth 20-point game this season and 66th in her career. Joens totaled 26 points along with 15 rebounds to bring her season total to eight double-doubles. Joens shot 52% on the day and went 5-11 from beyond the arc.

Next Up
No. 18 Iowa State will head to Fort Worth to take on TCU on Wednesday. The game will be televised on ESPN+ with tip off at 6:30 p.m. 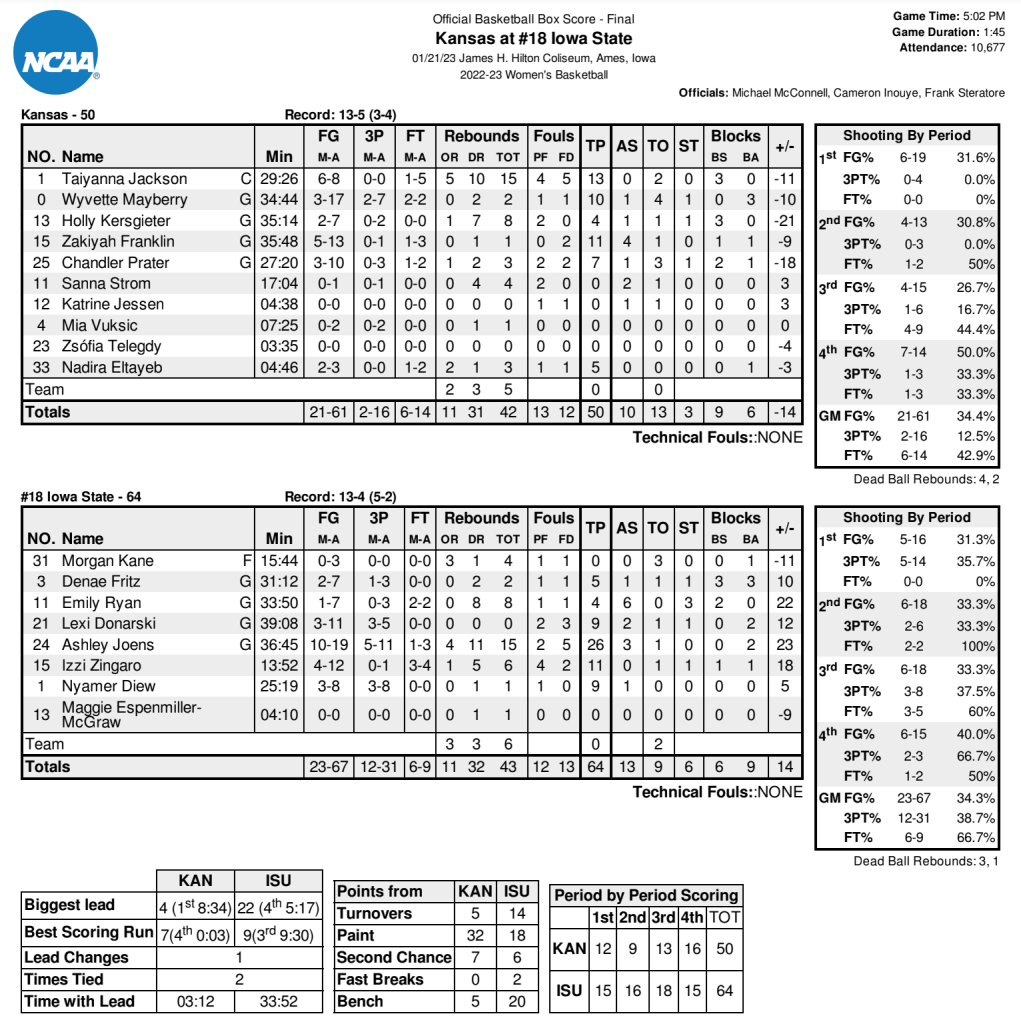