CEDAR FALLS – The Panthers had another all-around performance to take down the UIC Flames 79-44 on Saturday afternoon.

CEDAR FALLS – The Panthers had another all-around performance to take down the UIC Flames 79-44 on Saturday afternoon.

UNI continued a dominant week in its win over UIC, as it had its second straight game where all members of the Panther roster found the floor. UNI had its first perfect game at the line against the Flames, going three for three in its fewest trips to the line this season. Two Panthers set new career records against UIC as guard Kam Finley moved into 9th place on the all-time three-pointer list. Forward Rachael Heittola recorded her 1,000th combined NCAA point between DII Bemidji State and UNI.

“I thought we were locked in from start to finish defensively,” said Head Coach Tanya Warren following the win. “We rebounded well. We had two emphases, defend the bounce and defensive rebounds. And I thought we did a terrific job of that. Our ability to get stops allowed us to get out and run in transition and get into a strong offensive rhythm.”

The Panthers traded baskets with UIC to start Saturday’s game. UNI quickly pulled away on an 11-0 run in the middle of the first quarter to take an early double-digit lead. The Flames put up two baskets to end the quarter and break the Panthers run. But UNI still held a six-point advantage after 10 minutes of play.

It was a much slower start to the second quarter, as neither team made a shot for the first two minutes. Finley had the first bucket of the quarter with a second-chance layup. That layup started a seven-point run to get the Panthers back up to a double-digit lead.

UIC put together a brief run before UNI started heating up behind the arc. The Panthers made five threes in the second quarter, with four coming in the last five minutes of the half. The hot three-point shooting put UNI up by 21, going into the second half.

The Panthers picked up right where they left off in the third quarter. UNI got an early three from guard Emerson Green that set the pace in the second half. The Panthers made three treys in the first three minutes of the quarter to lead by 28. The Flames tried to get back into the game with short runs throughout the third, but UNI found offense at every turn to keep the game in check. The Panthers were leading 65-34 with one quarter to go.

In the fourth, UNI stuck with its bench players as they put up 38 points in the game. Guards Taryn Wharton and Ellie Foster led the way through the quarter with four points apiece. The Panthers stuck to points in the paint in the final frame. Foster sunk the final basket with less than a minute on the clock. UNI picked up their fourth straight Valley win with the 79-44 victory.

The Panthers continued to grow their average scoring margin with the 35-point win. For the second game in a row, UNI was over 50% from the floor going 32-61 (52.5). The Panthers also were successful behind the arc, making 40% of their three-point tries. UNI also tied a season-low five turnovers.

Point guards Maya McDermott, Taryn Wharton, and Green all recorded double-digits as McDermott led the way with 12. Boffeli grabbed eight boards for the Panthers on defense while freshman Ryley Goebel had a team-high four steals and three blocks.

UP NEXT:
UNI returns to the road for two games next week. The Panthers will make their first stop of the week in Springfield, Mo. to play the Missouri State Lady Bears. Tipoff from Great Southern Bank Arena is set for 6 p.m. and is the Missouri Valley Conference Game of the Week. 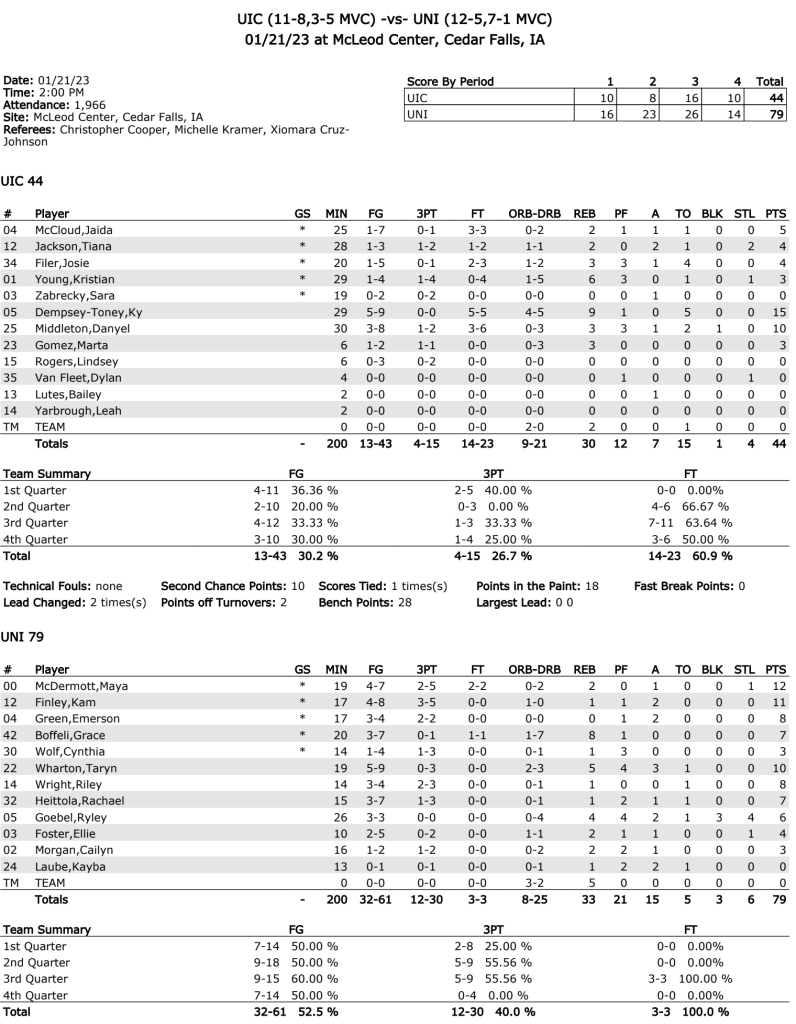