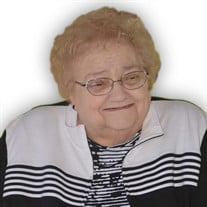 A visitation with viewing will be held Sunday afternoon, December 4, 2022 from 2:00 pm until 4:00 pm at Hogan Bremer Moore Colonial Chapel, 126 3rd St NE, Mason City and will resume one hour prior to Dorothy’s service at the church on Monday.

The daughter of Dan and Mollie (Weitzel) Pigman, Dorothy Irene was born at home in Mason City on January 11, 1930 the youngest of three children. She was raised in Mason City and attended McKinley, Grant and Roosevelt elementary schools before graduating from Mason City High School among the class of 1948.

On June 20, 1948 Dorothy was united in marriage to Albert Gossweiler in Mason City. They had met by chance at Harry’s Sweet Shop in Mason City when Al and a buddy went in to buy a stick of gum. Together they were blessed with 74 years of marriage and three children, Dennis, Steve, and Pam.
For many years Dorothy and Al resided in Rockwell, where she worked as the Librarian at the Rockwell Library and owned and operated Rockwell Sundries for many years.

In her free time Dorothy loved watching her children and grandchildren dance and compete in dance competitions. She began attending dance shows in 1958 and continued until 2020. She also loved shopping, and could always find something to bring home. She enjoyed adding to her ever growing frog collection, listening to Elvis, watching Elvis movies, and spending her time doing ceramics.

Dorothy was a longtime member of the Rockwell United Methodist Church and was very involved over the years in Sunday school, various circles, and Women’s Club.

Dorothy loved attending parades and was especially fond of the BandFest Parade. She was proud to attend her final BandFest parade the year her grandson, Christian, was crowned Mason City High School Band King.

Dorothy is preceded in death by her parents, Dan and Mollie Pigman; brother, Henry Pigman; and sister, Katie Lynch.