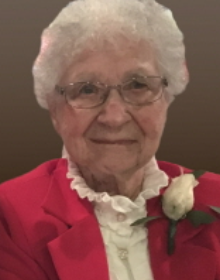 A funeral service will be held at 11:00 a.m. on Monday, October 10, 2022 at the United Church of Christ in Colwell with Pastor Victoria Mead officiating. Burial will be at Sunnyside Memory Gardens in rural Charles City.

Visitation will be held from 3:00 to 5:00 p.m. on Sunday, October 9, 2022 at Hauser Weishaar Funeral Home and continue one hour prior to the service on Monday at the church.

She received her education in Woolstock Township and Woolstock High School through 11th grade, and graduated from Galt High School in 1938.

On February 23, 1941 she was married to Elmer William Tudor at her Grandmother Simpson’s home in Clarion, Iowa. They farmed in the Dows and Rowan area until March of 1950. They then moved to rural Colwell, Iowa. They remained on the farm until the death of Elmer in April of 1989. Marjorie then moved to her home in Charles City. She remained there until she entered the nursing home in 2018.

Marj and Elmer were parents of Patsy, Janean, Kerry, Jeff, and Connie.

Marj was a member of the United Church of Christ in Colwell. She was a Cub Scout den mother, belonged to Pilgrim fellowship, taught bible school, served on the church council, and served on the board of the Floyd County Farm Bureau Women. She also enjoyed trips to the casino with the Heritage Club. She traveled to 13 foreign countries, including Africa and Australia. She also visited all 50 states.

The couple enjoyed many activities together. They belonged to the Charles City Twisters Square Dance Club, The Double C Saddle Club, and a bowling league. Marj bowled on the senior citizen bowling league also. They had many friends and enjoyed being in several 500 Card club groups both in Wright County and in the Colwell area.

Her favorite story, repeated more in later years, was how she met Elmer at the skating rink. She thought he was quite handsome and told her friend she might trip him. She then said that she didn’t have to. He immediately asked her to skate and it was the beginning of a long loving life together.

In lieu of flowers, memorials may be directed to the Colwell United Church of Christ, food pantry, or a hospice of your choice.