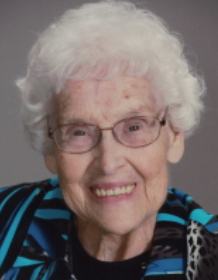 Bernadette “Bernie” Genevieve Kraus entered eternal rest on September 16, 2022, at her Daughter and Son-in-law’s home surrounded by her loving family.

A Mass of Christian Burial for Bernadette “Bernie” Kraus will be held at 11:00 a.m. on Friday, September 23, 2022 at Immaculate Conception Catholic Church in Charles City with Reverend Gary Mayer officiating and Reverend Tom Heathershaw concelebrating the Mass. Burial will be at Calvary Cemetery in Charles City.

Visitation will be from 5:00 to 7:00 p.m. on Thursday, September 22, 2022 at Hauser Weishaar Funeral Home in Charles City with a Scriptural Wake Service beginning at 7:00 p.m. Visitation will continue one hour before the funeral Mass at the church on Friday.

Bernadette’s story began on April 15, 1925 when she was born in Meyer, Iowa to Joseph and Catherine (Hemann) Koenigs. She was Baptized at Sacred Heart Catholic Church and attended school in Meyer. She was the fourth of seven children and spent her childhood on the farm with her family.

On August 3, 1944, she was united in marriage to John Vincent Kraus at Sacred Heart Church. John and Bernie lived in Osage until 1965, when they eventually made their home in Charles City, Iowa. Their union blessed them with six children who brought joy and adventure to their lives. John & Bernie enjoyed traveling to Austin, Minnesota where they would dance the night away. Bernie worked for Ray’s Pizza and The Charles City Press until she retired in 1987. In retirement, they took many trips to Florida and during the summer months could be found around a bonfire at the Lime Springs campground.

When Bernadette was not busy cooking, baking, and caring for her family, she enjoyed coffee dates with friends and neighbors. She loved gardening especially flowers and her red geraniums. Bernadette had an extensive collection of angels and keychains. She enjoyed crafting, puzzles, and a friendly game of cribbage. She spent countless hours with her Grandchildren passing on her knowledge of baking, sewing, and canning. She also made sure to convey the importance of God and prayer. Later in life, Bernadette grew to love watching cardinals and sipping a glass of wine every now and again.

Bernadette had unwavering faith as a devout Catholic. If ever family and friends needed a prayer answered, she was the one to go to. She was a member of several groups through Immaculate Conception Church including Rosary Society, Carmelites, and St. Bernadette Circle. She volunteered with the VFW and Legion Auxiliary.

If you had the pleasure of knowing Bernadette, Bernie, Grandma B, it was evident that she was the matriarch and center of her family. Her smile and quick wit were contagious. While we feel immense pain and sadness in losing our “Saint on earth,” we know she will never be far. We will find comfort in each sighting of a cardinal and pennies from heaven.

Bernadettes’s entire family wishes to extend a heartfelt thank you to the staff of St. Croix Hospice for the care and comfort they have provided the past two years.