This news story was published on July 5, 2021.
Advertise on NIT • Subscribe to NIT 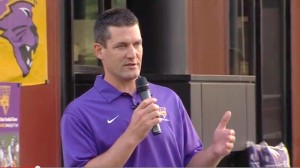 CEDAR FALLS – UNI head men’s basketball coach Ben Jacobson has signed a contract extension that locks up the four-time Missouri Valley Conference Coach of the Year through the end of the 2028-29 season.

Jacobson is the winningest coach in UNI history with 301 victories and a .605 winning percentage. Under his guidance, the Panthers have earned three regular-season MVC titles, including the 2019-2020 season and four Arch Madness championships.

UNI has made four trips to the NCAA tournament and qualified for post-season play eight times in Jacobson’s tenure, including the legendary 2010 second-round win over Kansas and a sweet-16 run. The Panthers also advanced to the round of 32 during the 2014-15 and the 2015-16 season.

He is the only coach in MVC history to pick up two wins over a number-one ranked team. Three UNI players have earned the Valley’s Larry Bird Player of the Year trophy. He has a 160-110 (.593) record in the Valley.

During Jacobson’s tenure, two Panthers, Adam Koch and A. J. Green were named the MVC Scholar-Athlete of the Year and Koch also earned the prestigious NCAA Post Graduate Scholarship. UNI men’s basketball ended the spring 2021 semester with a 3.10 team GPA.

“Coach Jake has led our men’s basketball program to unprecedented heights and has done it with class and dignity,” Director of Athletics David Harris said. “He has built a program that is highly respected across the NCAA for the way that our student-athletes carry themselves on and off of the court. We are proud that he is our coach and look forward to an exciting year next season and continued success under his leadership.”

He began his career at North Dakota where he was played his college career in the early 90s. He was a graduate assistant from 1994-96 before becoming a full-time assistant ahead of the 1996-97 season. He was an assistant at North Dakota State for the 2000-01 season before coming to Cedar Falls.

“I want to thank David Harris and President Nook for their continued support and trust in our basketball program,” Jacobson said. “I am thrilled with our current student-athletes and the commitment they have shown to each other and our university. We are hard at work preparing for a terrific season in front of a full McLeod Center. Dawn and I are extremely grateful for the support from our administration, donors and fans. We look forward to continuing to add to the tradition of our men’s basketball program.”

A native of Mayville, N.D., Jacobson graduated from Mayville-Portland High School in 1989 as valedictorian. He received his bachelor’s degree in physical education from North Dakota in 1994. Jacobson and his wife, Dawn, have two children, Hunter and Tanner.