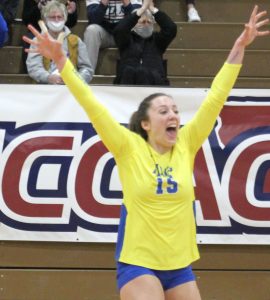 MASON CITY – For the third time in school history, the NIACC volleyball team has an all-American selection.

NIACC freshman Grace Tobin, who prepped at Mason City High, earned honorable mention NJCAA Division II honors. Tobin, an outside hitter, is one of five ICCAC volleyball players to be selected to the all-American teams.

“Grace is so deserving of this recognition,” NIACC coach Chris Brandt said. “She works hard on and off the court as well as being an amzaing young woman of character.”

“She is a humble athlete who isn’t afraid to put in the time when no one else is around,” Brandt said. “In fact, when she heard about this, she was on her way to the gym with Becca (Steffen).

“We are so proud of her and the team who pushed her to be recognized as one of the best in the nation.”