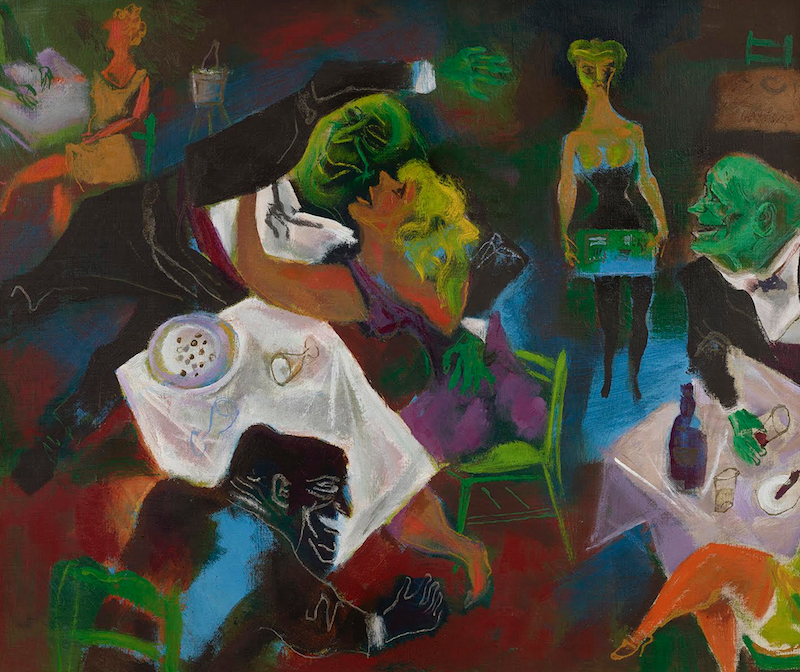 MASON CITY – The MacNider Art Museum has purchased a painting by American artist William Gropper in honor of longtime Museum volunteer and supporter Terry MacGregor. The work, entitled “Night Club” was purchased with funds donated by the family of Terry MacGregor in her honor. Terry passed away in 2020.

Terry MacGregor was a life-long supporter of the MacNider Museum. She was active in a number of the Museum’s programs, and was as a founding member of the Foreign Film series that eventually found a home at the MacNider Museum. An avid photographer, Terry often submitted and exhibited photographs at the Museum’s Cerro Gordo Photo Show. Her passion for the arts was evident in her continual enthusiasm for the Museum. “It is wonderful that we are able to honor her memory with such an important piece,” said MacNider Museum Director Edith Blanchard. “Terry was such an important person to our museum. We are delighted the family had chosen to remember her in this way.”

William Gropper was born in New York City in 1897. His youth was marked by poverty and struggles in the ghettos of New York. As a young man he was able to take classes at the National Academy of Design and the New York School of Applied Arts. After studying painting with artists such as Robert Henri and George Bellows, he joined the New York Tribune as a cartoonist. Soon after he began drawing for other publications such as the New York Post, Vanity Fair, and the Morning Freiheit. These cartoons and illustrations often had political commentary as a subject matter. Gropper began painting in 1921. Shaped by his early years in poverty, he followed the style of his mentors Henri and Bellows and choose to paint images of the common person. As an artist he was sought to bring awareness to social ills in American Society. As he continued his career his technique became more abstract and his subject matter, such as “Night Club”, often gave commentary on his views of the upper class elites.

Visitors may view the piece during the regular open hours of the Museum Monday –Saturday 10:00 a.m. – 5:00 p.m., with extended hours till 8:00 p.m. on Thursdays. It is located at 303 2nd Street SE, Mason City, Iowa and has no admission fee. More information about exhibits, programs, and events can be found at the Museum’s website at www.macniderart.org or at its Facebook page. You can also call 641-421-3666 for more information.