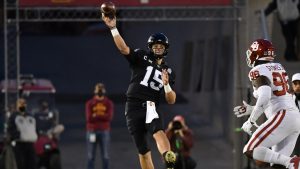 IRVING, TX – Iowa State quarterback Brock Purdy was named the Big 12 Offensive Player of the Week for his outstanding performance against West Virginia on Saturday.

Purdy was sensational in helping Iowa State clinch first place in the Big 12 regular-season standings and a spot in the Big 12 Championship Game for the first time in school history.

Purdy was precise and elite in the 42-6 win over West Virginia, completing 87.0 percent (20-of-23) of his passes, the second-best single-game completion rate in school history. He also accounted for four touchdowns, three through the air and one by rush, the sixth time in his career he’s been responsible for four or more touchdowns in a game.

Purdy threw for 247 yards and rushed for 38 yards.

Purdy has now led Iowa State to 22 victories, the winningest quarterback in school history.
He owns or shares 25 school records.