This news story was published on November 12, 2020.
Advertise on NIT • Subscribe to NIT

CHARLES CITY – A Charles City man has been sent to prison for a drunk driving accident that took a child’s life last year.

An auto accident occurred in Floyd county on October 26, 2019.  Jesse Duane Blade, age 30, was northbound, driving his 2015 Ford Taurus at about 6:36 AM that morning on Glass Avenue near Rudd Park Road. Glass allegedly failed to stop at a posted stop sign and crashed broadside into an eastbound 2003 Ford Windstar van driven by 57-year-old Ronald Paul Fisher of Mason City.

As a result of the collion, 9-year-old Royce G Fisher died. Ronald Paul Fisher was injured, as were 50-year-old Sarah J Fisher and 11-year-old Aidyn Kline.

The accident remained under investigation.

On March 24, 2020, the Iowa State Patrol brought a number of charges against Blade, including:

Blade was been granted a public defender.

Finally, after a guilty plea in September to all charges except one count of homicide by vehicle – reckless driving (dismissed) Blade was sentenced to 25 years in prison along with $5,122.75 in fines and court fees. 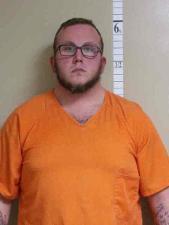