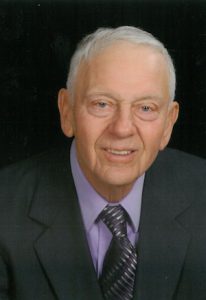 Charles August Krumwiede, 87, of Charles City, passed away peacefully with family by his side on Sunday, December 1, 2019 at the 11th Street Chautauqua Guest Home in Charles City.

A funeral service for Charles Krumwiede will be held at 10:30 a.m. on Thursday, December 5, 2019 at Messiah Lutheran Church with Pastor Norman Bauer officiating in Charles City. Burial will be at Riverside Cemetery in Charles City.

A visitation will be held from 5:00 to 7:00 p.m. on Wednesday, December 4, 2019 at Hauser Weishaar Funeral Home and continue one hour prior to the service on Thursday at the church.

Charles was born on March 29, 1932 to Fred W. and Hilda (Meyne) Krumwiede at Waverly, Iowa. He was baptized and confirmed at St. Paul Lutheran Church in Waverly and graduated from Waverly High School in 1950 and helped his dad on the farm. In October of 1952 he entered the U.S. Army serving in France and was discharged in September, 1954. He then worked at the Oliver Corporation in Charles City.

On June 3, 1956 he was united in marriage to Alice Leona Cook at St. John Evangelical Lutheran Church in Charles City. They began farming with his father and brothers and lived on a farm near Shell Rock. He served six years on the council of Faith Lutheran Church. In 1970 they moved to a farm they purchased near Charles City. He was an active member of the community, serving on the County 4-H Committee, the Floyd County Cattlemen’s Board, and the County Fair Board. Charles was a co-founder of the Iowa Cattle Marketing Cooperative and served on its board for 20 years. He was honored to be a director of the former Commercial Trust and Savings Bank in Charles City. He belonged to the county, state and National Cattlemen’s Association for many years. He was a Farm Bureau member and active member of Messiah Lutheran Church.
Charles- known to many as Chuck or Charlie, loved his Lord, his family and spending time with them and attending the grandkids’ activities. Visiting with family or friends over coffee or a meal was a special joy. He loved the farm life (especially running the combine), reading, going out to eat, traveling, the land, cattle and trains. He adored Princess, the stray cat who came to stay.

Memorials may be given to Messiah Lutheran Church or donor’s choice.
Hauser Weishaar Funeral Home, (641) 228-2323, 1205 South Main Street, Charles City, Iowa 50616 is in charge of local arrangements. Online condolences may be left on the Tribute Wall for the family at www.hauserfh.com.