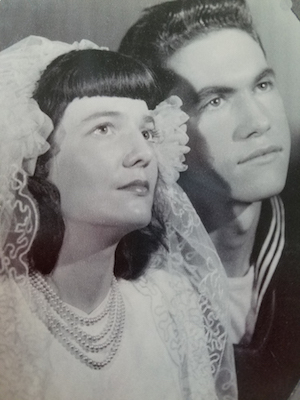 Valentina “Val” Nicolaevna Imshinetskaya Ewen passed away on Friday, November 29, 2019, at Colonial Manor in Elma, Iowa at the age of 91. Valentina and her deceased husband, Robert Franklin Ewen were married 62 years and resided in Charles City.

A Mass of Christian Burial will be held in late Spring 2020. Family requests no flowers. Memorials can be sent to Immaculate Conception Church, 106 Chapel Lane, Charles City, IA 50616 in her honor.

Valentina was born in Shitoukhelszy. Manchuria, China, August circa 12, 1928. The only child of Nicolay Koozmeen Imshinetsky and Lunov Savelevna Lansova. Nicolay and Lunov escaped the civil unrest in the Soviet Union and sought refuge in Manchuria. Hard times followed them to Manchuria and they found themselves living on scraps from the mental institution where Lunov worked. In 1933, Valentina was sent to live with her aunt, Nicolay’s sister, in Shanghai and was spared the destitution of Manchuria. Valentina’s parents arrived in Shanghai in 1937.

Valentina often told the story of how she and Robert met. Robert was in the U.S. Navy working in the Shanghai Post Office. Valentina went to the Post Office to mail a letter and it was love at first sight. Although neither spoke the other’s language, Robert eventually proposed and Valentina accepted.

The Navy denied Robert permission to marry Valentina and transferred Robert to Tsingtao, China. The Navy relented and Valentina and Robert left China sailing on the U.S.S. Billy Mitchell and were married in San Francisco on December 11, 1948. They settled in Robert’s home town of Charles City.

In 1949, communists took over China and Valentina’s parents, being undocumented Russian war refugees, were evacuated to Liverpool, New South Wales, Australia and lived there until their deaths.

Valentina was a brave and courageous woman who took a chance on a new life in a new country. She was fortunate to find herself surrounded by the most wonderful family. Robert’s parents, brothers-in-law and sisters-in-law welcomed her with open arms and she spoke often how much they meant to her.

Her interests included cooking, baking, knitting, taking long walks, volunteering at the YMCA teaching water aerobics and spending time with friends and family. She worked for many years including Club 218, Dr. Mayfield Laboratories and Mutual Federal.

Valentina never wanted food wasted and told her children often ‘there are starving people all over the world that would love that food’. Because of her childhood experiences she became a very caring, nonjudgmental woman who understood what hardship, war, fear, hunger, exploitation, and sorrow is and wished peace and love for everyone.
She is survived by four children: Dian (John) Hauenstein, Linda (Mike) Wandro, Douglas Paul (Caroline) Ewen and Joan Merrill; four grandsons: John (Steffany), Josef and Jacob (Elizabeth) Hauenstein and Brian (Shannon) Mitchell; seven great-grandchildren: Zachary, Andrew and Jacob Mitchell, Maleah and Gabriel Johnson, Isabella and John Alexander Hauenstein; several nieces and nephews and their families; and a dear special friend, Bernice Toepfer.

Her parents; husband, Robert, and his parents; son-in-law, Bobby Merrill; grandson, Matthew Mitchell; nephew, Father Brian Shepley; and all her sisters-in-law and brothers-in-law preceded her in death.