This news story was published on August 20, 2019.
Advertise on NIT • Subscribe to NIT 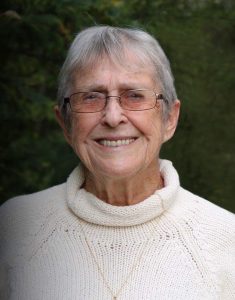 Virginia Tudor, 88, of Charles City, passed away Monday, August 19, 2019 at the Waverly Health Center in Waverly with her family by her side.

A funeral service for Virginia Tudor will be at 11:00 a.m. Friday, August 23, 2019 at The Bridge Church (First Wesleyan Church) in Charles City with Pastor Robert Williams officiating. Inurnment will be at a later date at Sunnyside Memory Gardens in rural Charles City.

Visitation will be at Hauser Funeral Home from 5:00 to 7:00 p.m. Thursday, August 22, 2019 and will continue one hour before the funeral service at the church on Friday.

Virginia Jean Ann (Chambers) Tudor, the daughter of Raymond and Sadie (Weston) Chambers, was born January 7, 1931 in rural Charles City. She received her education in both Charles City and Osage, graduating from Osage High School.
On November 10, 1956, Virginia was united in marriage to Hurvey Tudor at The Little Brown Church in Nashua. The couple made their home on the Tudor family farm and they were blessed with three children: Jean, Joe and Rod. Virginia was at Hurvey’s side on the farm working hand-in-hand with him. Whenever you saw one of them, the other was very close behind.

Virginia was a member of First Wesleyan Church (The Bridge Church), Farm Bureau and the Charles City Saddle Club. She and Hurvey spent many years attending events together for all of these groups.

Virginia enjoyed painting, sewing, baking, gardening (flowers and vegetables), birds (feeding and watching) and going to farmer’s markets where she sold some of her produce. She looked after her two cats, Tommy and Katrina, and was always concerned for their well-being (especially in recent days). Virginia loved her family and spent as much time with them as possible.

She was preceded in death by her parents; husband, Hurvey on December 9, 2016; sister, Elizabeth “Betty” Starr; and five brothers: Forest, James, Raymond, Ned and Freeman Chambers.