This news story was published on April 27, 2019.
Advertise on NIT • Subscribe to NIT 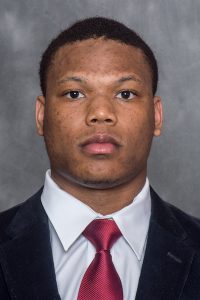 AMES – Iowa State running back David Montgomery is officially headed to the NFL.

The two-time All-American, who rushed for over 1,000 yards the last two seasons, was selected in the third round by the Chicago Bears as the 73rd pick of the 2019 NFL Draft.

Montgomery had another season eligibility remaining, but announced his intentions to turn professional in January.

“The impact David had on the Iowa State football program, the University and to our great community is impossible to quantify,” Iowa State head coach Matt Campbell said. “He will undoubtedly be remembered as one of the all-time greats to wear the Cardinal and Gold, but his legacy will extend far beyond the field. He truly led the culture change within our walls. I am so excited for David and his family as he takes his next step in his journey in the NFL.”

Montgomery ranked third in the Big 12 and 23rd nationally in rushing yards per game (101.3) in 2018, recording seven 100-yard rushing games to tie for third on ISU’s season list.

His toughness, durability and ability to shake off tackles made him one of the top running backs in the class. Montgomery led the nation in forced missed tackles according to Pro Football Focus in both 2017 (109) and 2018 (100).