CEDAR RAPIDS – Two Waverly, Iowa men who possessed and sold counterfeit carfentanil pills were sentenced to a total of more than 11 years in federal prison.

In a plea agreement, Lensmeyer admitted that he and Sage purchased hundreds of purported prescription pills, including purported oxycodone and alprazolam pills, through a “dark web” marketplace. Evidence at an earlier hearing showed that, during a search of Lensmeyer’s and Sage’s shared Cedar Falls residence in June 2017, investigators seized over 800 blue pills that appeared to be prescription oxycodone pills (depicted below), over $20,000 in cash, over 30 grams of cocaine, over 600 grams of marijuana, and a loaded .32 caliber handgun. Later testing determined that most of the blue pills contained carfentanil, while a smaller amount contained another synthetic fentanyl called cyclopropyl fentanyl. Carfentanil is a powerful narcotic that is 10,000 times more potent than morphine and 100 times more potent than fentanyl. It is not approved for use by humans, but is used as an elephant tranquilizer.

Both men are being held in the United States Marshal’s custody until they can be transported to a federal prison.

The case was investigated by the Tri-County Drug Enforcement Task Force and was prosecuted by Assistant United States Attorney Dan Chatham. 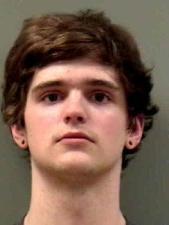