The Iowa Corn Cy-Hawk dual is one of the best wrestling events in all of college wrestling. Today, 8,861 fans were in attendance at Hilton Coliseum, the most since the Hawks and Cyclones squared off on Dec. 6, 2009.

Iowa jumped out to an early 19-0 lead at the intermission and didn’t drop a match until the 197-pound bout which was a forfeit. In total, the Hawks won nine out of the 10 matches, including four by bonus-point margin.

The Cyclones’ lone victory of the day came at 197 pounds. Redshirt freshman Sam Colbray won by forfeit. Colbray is now 14-11 on the season and 8-6 in dual action.

The Hawkeyes recorded 22 takedowns and allowed one. The 29-point margin of victory is the largest in the Iowa Corn Cy-Hawk series since a 32-3 Hawkeye win in 2012.

The dual was over shortly after 165 started. Marinelli led Skyler St. John, 2-0, when he used a front headlock whip-over to end the match with a fall in 52 seconds. The pin gave Iowa a 25-0 lead with four matches to go.

Paul Glynn was staring at a 7-0 deficit and buried in more than two minutes of riding time before scoring eight points in the final three minutes to rally for an 8-7 win at 133. Glynn got on the board with a second-period takedown and pulled within 7-6 when he turned a cradle into four nearfall points. A third-period takedown gave Glynn the lead with 1:04 left in the match, and he finished on top to erase riding time and walk off the mat with the 8-7 decision.

Vince Turk got the nod at 141 and handed a 13-5 major decision to No. 18 Ian Parker, the Cyclones lone ranked wrestler. Turk scored two takedowns and two nearfall in the first period, and added a reversal and takedown in the third to complement 2:51 of riding time. The win was Turk’s first over a ranked opponent this season.

Iowa retained possession of the Dan Gable Traveling Trophy, making it a perfect 8-for-8 in duals since the trophy’s inception in 2010. The Hawkeyes also extended their lead in the 2017-18 Iowa Corn Cy-Hawk Series to 11-8. 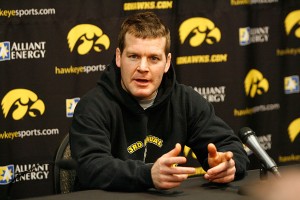 Iowa returns to the mat March 3-4 at the Big Ten Championships in East Lansing, Michigan.

Iowa State turns its focus to the postseason. The Cyclones have a week off and then are headed to the Big 12 Championships. The conference tournament will be wrestled in Tulsa, Okla., at the BOK Center.