This news story was published on August 29, 2016.
Advertise on NIT • Subscribe to NIT 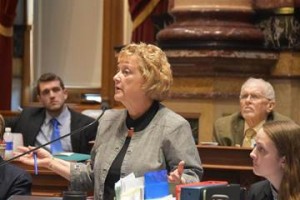 When Governor Branstad announced plans to hand over the administration of Iowa Medicaid to out-of-state, for-profit companies, I was skeptical.
Medicaid provides health care to one in six Iowans, more than 500-thousand people.
Medicaid is THE health care safety net that EVERY Iowa family can depend on when faced with long-term medical problems.
Medicaid services are provided by tens of thousands of Iowa workers and hundreds and hundreds of Iowa businesses.
Clearly, any changes to Iowa Medicaid need to be carefully thought out in advance. Governor Branstad disagreed, and rushed the process.
He wanted to privatize Medicaid, and do it faster and more completely than any other state ever has.
Iowans were promised Medicaid privatization would improve health care and reduce costs.
Neither has happened.
Instead, Iowans are being denied health care, communities are losing local health care providers, and Iowans are losing their jobs.
I attended this morning’s Medicaid listening post at the Statehouse. I’ve attended similar local meetings across the state.
I’ve talked with Iowans in tears as they describe fighting to protect the health care of their disabled family members.
I’ve listened to social workers describe the maze of bureaucratic red tape and confusion now preventing them from helping Iowans in need.
I’ve also talked with doctors, home health care workers, social workers, and nursing home administrators.
And I’ve read the results of a recent survey of those health care providers which reveled:
• 90% say their administrative costs have increased;
• 80% say more health care claims are being denied;
• 79% of providers say they are not getting paid on time;
• 66% say they are being reimbursed at rates lower than their contracted rates;
• 61% say the quality of services they can provide has been reduced;
• 46% have or plan to cut their services; and
• 28% have taken out loans while waiting to be paid.
At previous meetings of this legislative oversight committee, the managed care organizations and the Branstad Administration painted a rosy picture of Medicaid privatization.
Those rosy pictures had little to do with reality.
Here’s the reality of where we are now:
If privatized Medicaid is a three-legged stool of patients, providers, and administrators, then all three legs are broken.
1. Patients and their families are exasperated, desperate, furious – – sometimes all at the same time.
2. Providers are not being paid, have to hire bookkeepers and lay off caregivers, and are cutting back, if not actually closing their doors to Medicaid members.


3. And last week we learned that the MCOs are losing large sums of money. You have to understand that the Branstad Administration is on course to pay more state dollars for less health care for Iowans.

These are factors to which you must pay attention, because everyone is paying for the Governor’s gamble.
Privatized Medicaid is a three-legged stool with three broken legs.
Today, we need the Branstad Administration to tell us how they plan to fix that broken stool.