This news story was published on August 29, 2016.
Advertise on NIT • Subscribe to NIT

CHARLES CITY – A Charles City woman arrested earlier this year on two counts of sexual abuse of a child has been found guilty by a jury.

Beek was taken to jail on two counts of felony third-degree sexual abuse. KCHAnews.com reported that a criminal complaint states that “Beek bound the alleged victim’s hands and committed sexual acts against her will in an upstairs bedroom in her home back on May 11th. The victim was a minor.”

Beek was found guilty by a jury on August 26 of one count of felony third-degree sexual abuse. She will be sentenced on October 28.

Earlier this year, Beek pleaded guilty in Black Hawk county district court to assault while displaying a dangerous weapon and criminal mischief. She was sentenced to a suspended prison sentence, 2 years of probation and ordered to pay $714.25 in fines and court fees. She has not yet been charged with violating that probation due to this sex abuse conviction.

Beek spent time in the Beje Clark halfway house in Mason City back in 2012 after she was charged with assault causing injury to a police officer. She was later sent to prison and released in 2013, court records show. 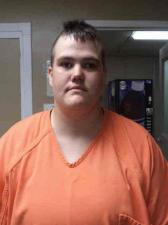