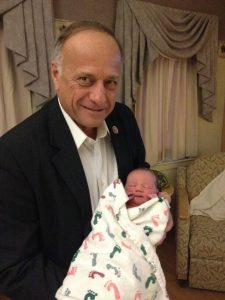 A proud Steve King
poses with his grand baby

WASHINGTON, D.C. – Iowa Congressman Steve King, a known champion for the unborn, this week blasted an alleged pro-life organization for failing to support his bill that proclaims a fetus with a beating heart is a person.

Last month, Congressman Steve King introduced “The Heartbeat Bill,” legislation that would require physicians to detect the heartbeat and prohibit the abortion of a baby with a beating heart. The bill has had support from conservatives and many pro-life organizations.

However, one notable outfit has allegedly refused to sign on with support – National Right to Life – and Congressman King has taken notice.

On February 5, 2018, Congressman King spoke on the House floor to express his disappointment in National Right to Life for being the only major pro-life organization that is not supporting H.R. 490, the Heartbeat Protection Act.

On social media, King said, “The will of 170 Members who have signed on . . is all being stifled and frustrated by one organization: National Right to Life. The Heartbeat is a sure sign of life…why is National Right to Life standing in the way of overwhelmingly supported legislation that will stop abortions?”

“Is Something Wrong Within National Right to Life?” King continued. “How can the nation’s oldest and largest pro-life group oppose the pro-life Heartbeat Bill?”

Congressman King released video clips of remarks he delivered on the floor of the House of Representatives questioning how National Right to Life can justify their failure to support King’s pro-life Heartbeat Protection Act.