MASON CITY – A convicted meth crook who said he would blow up a Mason City building and kill the occupants was caught by police after a stop sign violation.

A Mason City police officer spotted fleet-footed Andrew Dean Williams on a bicycle on the evening of Saturday, September 30. Williams blew through a stop sign and the officer somehow got Williams to stop. The officer discovered that Williams, age 28, was wanted in connection to an incident that took place on September 12 in Mason City, in which Williams entered private property, threatened to blow up a building and kill the occupants before he vandalized the property. He faces charges of third-degree harassment and fifth-degree criminal mischief.

Williams, now allegedly calling Ackley, Iowa home, was taken to jail. Currently, he is facing methamphetamine possession charges brought by the Iowa Falls police department; he appears to have entered a guilty plea in the case. He is also facing charges of eluding and interference from Mason City police from back on July 1, when law enforcement caught him at Lime Creek Nature Center that morning. In August, he was guilty of criminal mischief in Franklin county and fined. He was convicted of a meth crime in Mason City he committed in 2015. 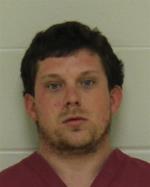