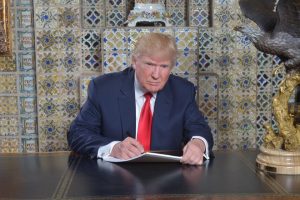 WASHINGTON, DC: “I want to congratulate President Trump and all Americans on the President’s successful trip to Europe this week.

The President’s speech in Warsaw, Poland was one for the ages, a vital, eloquent, and stirring articulation of the values and shared goals that bind us together with the Polish people, and with millions of others around the world who seek to live in freedom. We cannot mistake the significance of Poland and the great Polish people in the history of the struggle for human liberty. The message was desperately needed at this time from our American president and we are grateful for it and for the manner in which he delivered it.

President Trump also completed a number of critically important strategic meetings in Hamburg, Germany with heads of state from around the world, all central to strengthening our relationships and building partnerships that will defeat terrorists and expand and protect our liberties — in so doing protecting and promoting the interests of America and of freedom-loving people everywhere.
Americans should be proud of the strong American leadership being restored by President Trump. More importantly they should be proud to live in a country that stands for the values he has so ably expressed, shared, and defended.

President Trump’s actions have immensely helped restore our position as leader of the free world. This is time to set partisanship aside and work together on various serious problems in North Korea, Syria, and the Ukraine as well as other hotspots around the world.”