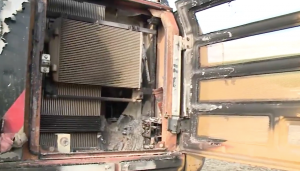 NEWTON, IOWA – Losses from burned equipment is mounting for the Dakota Access pipeline company, and now a substantial reward is being offered for help in catching those responsible.

Dakota Access has experienced the intentional burning of construction equipment by unknown individuals, according to the company. These illegal actions have resulted in millions of dollars in damage. Dakota Access and Precision Pipeline are offering a $100,000 reward for information leading to the arrest and conviction of those responsible. 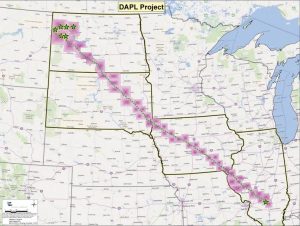 Earlier this month, on October 15, 2016 at approximately 11:38 PM, Jasper County Sheriff Office Dispatch received a 911 call. The caller indicated that they observed several pieces of construction equipment on fire near the area of Salmon St. and Hwy F 62, near the town of Reasnor, Jasper County, Iowa. Jasper County Deputies responded to the scene and observed three bulldozers and one excavator on fire. Reasnor, Sully and Newton Fire Departments also responded to the scene. Preliminary investigation indicated that fires were intentionally set. The equipment was operated by one of the companies contracted by the Dakota Access Pipeline project. The damage estimate was approximately $2,000,000. This is the same location that equipment was believed to be intentionally set on fire on August 1st, 2016.

Protestors from North Dakota to Missouri are making the job of building an oil pipeline difficult.  The project was given the go-ahead this year, setting off a firestorm of protests.  Dozens, if not hundreds, of people have been arrested along the pipeline route, which cuts diagonally through Iowa and begins in North Dakota and ends up in Illinois.