MASON CITY – Get your Donald Trump gear while you can.

A hastily set up Donald Trump store on a vacant Mason City lot is selling out of merchandise, the men running it say. Two men in a van with North Carolina plates set up their “store” Friday and have sold at least 100 Donald Trump yard signs at $10.00 apiece.

“I got 400 flags here, too,” one of the men told NIT this afternoon as he granted an interview.

“Stuff’s been moving fast,” the same gentleman (who did not give his name) explained, while his compatriot hovered nearby, nervously watching his business partner talk on camera. The man admitted he did not have permission to be on the privately-owned lot.

“We give the property owners free t-shirts if they come by,” he said. “They always give us the ‘thumbs up.'” County records show the property at 401 South Federal is owned by Carl and Margaret Anderson.

The store seemed to have a short supply of goods left for sale, even as two carfuls of Trump supporters pulled up. A couple of tables had cammo hats, t-shirts and other items stacked up.

The people in the cars answered in the affirmative when asked if they supported Donald Trump.

“Hell yes!” one lady said. “So does she,” pointing at a young child that was with them. “Go Donald Trump,” the child said for the camera.

The store will be open till perhaps 5:30 PM Friday night, then the men are clearing out to head back to North Carolina to re-stock. They said they will be back if Trump or Pence come back to town. 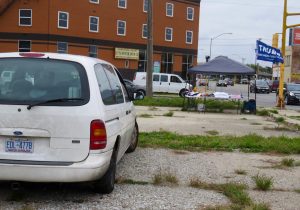 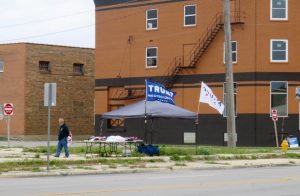