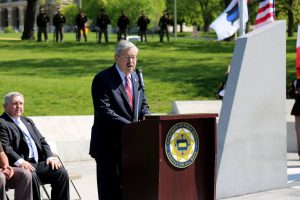 DES MOINES – Today, Gov. Terry E. Branstad highlighted a Federal Department of Health and Human Services (HHS) Payment Error Rate Measurement (PERM) Report showing the payment error for Iowa’s old Medicaid fee-for-service program was 9.9%, accounting for $318,590,017 in improper payments.  Most improper payments were a result of billing submitted for non-covered services or insufficient documentation.  These are payments managed care will prevent and fee-for-service could not in an efficient manner.  Iowa’s previous Medicaid managed care experience had a payment error rate of statistically 0%, according to the HHS report.

“Iowa is taking the right action in moving to managed care to deliver the right care for the patient while protecting Iowa taxpayers from fraud, waste, abuse and program integrity flaws,” Governor Branstad said. “Managed care is an effective tool to combat improper payments as these federal reports from HHS show.”

Lt. Gov. Reynolds added, “Modernizing the way we deliver health care to our Medicaid population is not a partisan issue.  This is about providing more access and choice than ever before to the patient while ensuring the sustainability of the Medicaid program.  As these reports demonstrate, our new modernized Medicaid system in Iowa is going to be much better off than under the old system that relied on paper and a 1970s computer system.”

Both Republican and Democratic governors across the country have taken steps to modernize their Medicaid systems to ensure that patients are being delivered the best possible care, while protecting taxpayers’ interests.  Recently, Democratic Governor John Bel Edwards of Louisiana cited Medicaid managed care as a way to combat Medicaid fraud.  Governor Edwards said,

Additionally, President Obama and his administration have made combating improper payments a high priority through its Executive Order 13520, Reducing Improper Payments. Preventing improper payments at its core is about good government and protecting the integrity of a program that is important to many Iowans. From President Obama on Executive Order 13520 of November 20, 2009, Reducing Improper Payments,

“My Administration is committed to reducing payment errors and eliminating waste, fraud, and abuse in Federal programs — a commitment reflected in Executive Order 13520 of November 20, 2009, Reducing Improper Payments. Executive departments and agencies should use every tool available to identify and subsequently reclaim the funds associated with improper payments. Thorough identification of improper payments promotes accountability at executive departments and agencies; it also makes the integrity of Federal spending transparent to taxpayers. Reclaiming the funds associated with improper payments is a critical component of the proper stewardship and protection of taxpayer dollars, and it underscores that waste, fraud, and abuse by entities receiving Federal payments will not be tolerated.”