This news story was published on July 24, 2016.
Advertise on NIT • Subscribe to NIT 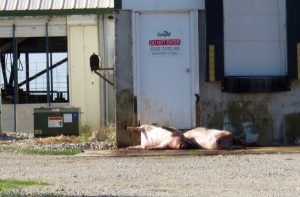 CLARION, IOWA – Elected officials in Wright county, Iowa have imposed strict rules on comments from the public at a hearing scheduled for Monday in Clarion on a proposed pig slaughterhouse.

At 9:30 AM Monday morning at the Wright county courthouse, Bryce Davis, Wright County Economic Development Director will present on the proposed $240 million Prestage pork plant. It is slated to be built 5 miles south of Eagle Grove, near Webster City and Fort Dodge. The 3-member board of supervisors will then hold first reading of the executive summary of the development agreement with Prestage, and second reading of Ordinance #50 on amendment to Zoning Ordinance for the unincorporated portion of Wright County. This zoning amendment would change the land where the plant would be built to an industrial zone instead of an agricultural zone. Also, second reading of Ordinance #51 will be held, on an amendment to provide for a change in zoning map of real property from agriculture to industrial

Prior to that presentation, a public hearing on entering into a Development Agreement with Prestage Foods of Iowa, LLC, will be held.

In Mason City, leading up to the defeat of Prestage, everyone was treated the same and given a full 5 minutes to speak.