Peggy Joy Schiefelbein, age 24, who calls Cherokee, Iowa home, was pulled over by the Iowa State Patrol in Cerro Gordo County on March 23. During the course of the arrest, marijuana was discovered by the arresting officer. Schiefelbein was arrested and charged with operating while under the influence first offense, possession of marijuana, possession of drug paraphernalia, and no insurance.

Schiefelbein posted $1,000 cash bond the next day and was released from the Cerro Gordo County Jail. She awaits an April 16 court date.

Schiefelbein was also in trouble in Mason City last month. Mason City police cited and released her for 5th degree criminal mischief for damage done to a room at the American Best Value Inn on February 22, 2014. Damage amount was approx $40. She pled guilty on March 19 and was ordered to pay $320.00 in court costs and fines. 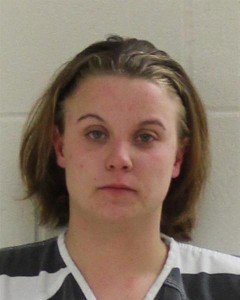