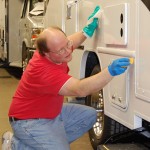 In North Iowa, Winnebago Industries is planning to expand its manufacturing footprint to nearby Lake Mills.

Earnings growth in the second quarter was driven by motorhome unit growth, coupled with gross margin improvement and incremental leverage of operating expenses. However, the improvement in earnings was mitigated due to various factors, including severe winter weather conditions that caused inefficiencies and brought about greater expenses.

Gross profit as a percentage of revenues improved to 10.0% in the Fiscal 2014 second quarter compared to 9.7% in the same period of Fiscal 2013, an improvement of 30 basis points. The increase was primarily attributable to greater delivery volumes, partially offset by higher costs due to weather-related production delays, a temporary component outsourcing program, and higher utility expenses.

Operating expenses as a percentage of revenues were leveraged during the quarter and contributed 50 basis points to the improvement in operating income margin, when excluding a gain on a sale of real estate of $629,000.

As previously announced, Winnebago received a large incremental rental order from Apollo Motorhome Holidays, an RV rental company, to be delivered during the Company’s Fiscal 2014 third quarter. The order is for approximately 500 units, however, Winnebago has contractually agreed to repurchase up to two thirds of the units at specified prices after one season of rental use. Therefore, only one third of the order will be reported as typical motorhome sales during the third quarter. The other two thirds of the units will be accounted for as lease revenue on a straight line basis over the period the units are held by Apollo due to the repurchase option. As a result, only one third of these units are reported in unit order backlog as of March 1, 2014.

Share Repurchase Update
During the Fiscal 2014 second quarter, the Company repurchased 615,715 shares of its common stock for approximately $15.9 million, at an average price of $25.86 per share. At March 1, 2014, the Company had authority to repurchase shares worth up to $18.4 million remaining under its stock repurchase program, which has no time restriction.

Management Comments
Chairman, CEO and President Randy Potts commented, “We achieved strong results for the quarter, notwithstanding challenges associated with the severe winter weather. Although we scheduled four additional production days to satisfy motorized backlog, the severe weather conditions caused numerous work delays and closures at both our Iowa and Indiana facilities, which led to the loss of multiple production days, and contributed to increased expenses due to inefficiencies that limited margin expansion and earnings growth. The improved results are testimony to the hard work of our team and improved dealer and retail consumer demand for our products.

“The Winnebago brand was recognized as the number one selling motorhome brand in 2013 by Statistical Surveys and has received this outstanding recognition every year since motorhome retail registrations were first reported in 1974. With favorable demand for our strong product lineup, including several new product introductions, we are optimistic for continued growth within the motorhome market.”

Chief Financial Officer Sarah Nielsen said, “Our operating cash flow for the second quarter was impacted by a receivables increase of approximately $27 million. The harsh winter weather conditions caused significant disruptions to our independent transportation company, which prevented them from delivering product timely to our dealers, and as a result increased our receivables. We anticipate positive operating cash flow in the third quarter as those receivables are reduced.”