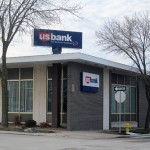 A US Bank branch in Mason City, Iowa

SAN FRANCISCO – A settlement in a lawsuit against US Bank would grant relief to over 2,000 workers who were refused adequate seating and breaks by the big bank.