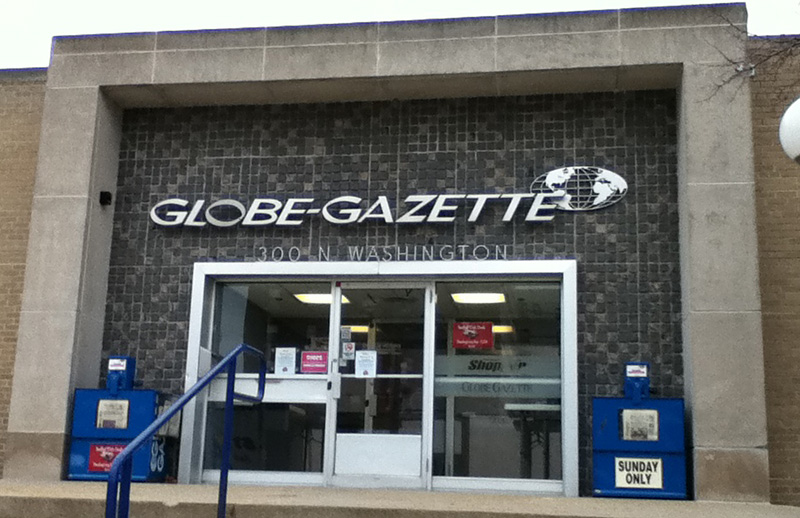 DAVENPORT – Lee Enterprises, which owns the Globe Gazette, bragged about its outlook this week as it struggles to pay back hundreds of millions in debt.

In a series of press releases, the company said that it is on the rebound as the economy looks up and is ahead of pace in paying back about $775 million in debt.  The company filed chapter 11 bankruptcy in 2011.  An investment by Warren Buffet has lead to a stock rebound for Lee, as it has recently hit yearly highs.

Lee said that part of its turnaround is due to an “aggressive sales culture” and a “meaningful headcount reduction”.  Evidence of this headcount reduction has been seen in Mason City at the Globe Gazette, as a long-time employee in the newsroom was told in recent days to pack up and leave before being escorted out of the building.

The “meaningful headcount reduction” is also evidenced by regionalization in areas such as human resources and what the company calls “outsourcing” of ad production.  Rumors that the Globe Gazette had outsourced most of its ad department to India have been rife for years.  The Missoula News reported in 2013 that “Lee Enterprises cuts designers” and wrote that “Lee Enterprises … notified at least eight employees at three of its Montana newspapers that their jobs are being terminated because the company is shipping a portion of its graphic design work overseas.” They backed up that information with a quote from a spokesperson from the Montana Department of Labor, who said “those jobs have been outsourced, I believe it was to India.”

Last year, Lee proudly proclaimed its outsourcing a success as is continues to “transform” its “business model”, which apparently includes fewer and fewer American men and women.

“We have outsourced ad production in 13 locations so far, resulting in faster turn-around time for advertisers, improved quality, less redundancy and lower cost,” the company said in a news release. “We expect continued significant savings from these steps.”

Another 2013 report quoted a Lee designer, who said “I work for a small Lee paper in Wisconsin as a multimedia graphic designer. Lee is now laying off designers also. They will be working with a company in Elgin, Illinois who outsources their designing to the Phillipines. Our sales staff will now have to design their customers ads so that the designers in the Phillipines will know what point size to make text. I will be out of my long career in October. Thanks to a(nother) Lee wide initiative!”