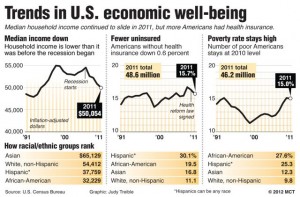 Charts show the 20-year trend in U.S. median income, poverty rate and percent of Americans with health insurance with information on how racial/ethnic groups rank.

WASHINGTON — The U.S. poverty rate leveled off last year for the first time since the Great Recession, but the halting recovery deepened the financial pain for middle-class families and pushed to a new high the income gap between the country’s richest and poorest citizens.

The number and share of people living in poverty was essentially unchanged from 2010 levels. That ended four straight years of increases, though not in California, where the rate rose to a 16-year high, the Census Bureau said Wednesday.

There was no relief for the average American: The median household income, after adjusting for inflation, dropped 1.5 percent in 2011 from the previous year to $50,054. That is now 8.1 percent lower than in 2007, when the recession began late that year.

The biggest hit fell on the middle- and lower-income groups, while upper-end households saw their incomes essentially unchanged. That raised one common index of inequality in America to an all-time high.

The Obama administration cast the Census Bureau’s annual report as evidence that the president’s policies were taking hold after the deep recession. The report indicated that job growth in the South and in America’s suburbs helped keep the poverty rate steady last year, at 15 percent of the population.

And officials also took credit for the improvement in the nation’s health insurance coverage rate, especially among young adults who, under the new health care law, can be covered under their parent’s policies.

“It is clear that had President Obama not taken swift and aggressive action to grow our economy and create jobs, today’s report would have shown much higher poverty rates, lower incomes and a greater share of the population without health insurance,” said Rebecca Blank, the acting U.S. secretary of commerce.

But the data on the continuing setback for average-income families give Obama’s critics fresh material to challenge the president’s dominant campaign message: that he is a defender of the middle class.

Even as payroll employment has been growing since early 2010, many of the new jobs are low-paying. And while those added jobs are helping lift some people out of poverty, for those who once had higher incomes, those jobs are all that they can find in a weak labor market.

“It’s the middle that seems to be struggling more than the poor,” said Sheldon Danziger, a poverty expert and public policy professor at the University of Michigan.

Timothy Smeeding, director of the Institute for Research on Poverty at the University of Wisconsin in Madison, said that households between the 20th and 60th percentile of incomes — roughly those that make $25,000 to $70,000 — are feeling the biggest strains.

“They’ve lost a lot of good jobs, and the jobs they’re getting aren’t as good,” Smeeding said. “That’s a disaffected group in America. Whoever wins that group’s vote is going to win the election,” he said.

That last year’s poverty rate didn’t rise surprised analysts, who were projecting another tick up in the figure, given the still-high unemployment rate and significant layoffs at local government offices.

The census report said there were about 46 million poor people in the U.S. last year, essentially the same as in 2010.

The main factor behind the leveling off was that 2.2 million more people, 1.7 million of them men, reported having full-time, year-round jobs last year. Some of them moved up from part-time work.

The job gains helped reduce the poverty rates for non-native U.S. residents, Latinos in particular, and families in the nation’s suburbs and the South, where the ranks of the poor had been growing in recent years. Florida’s poverty rate, for example, fell to 14.9 percent from 16 percent in 2010, and Mississippi’s fell to 17.4 percent from 22.5 percent.

For the nation as a whole, the 15 percent poverty rate is just a little less than multi-decade highs. Apart from this year and last, there were only three other years since the War on Poverty began in 1965 that the nation’s poverty rate was 15 percent or higher.

In addition to more jobs, unemployment insurance benefits, which are counted as cash income whereas food stamps are not figured into the poverty calculations, continued to help many families. Without the jobless benefits, an additional 2.3 million people would have fallen below the poverty line.

Even so, had the total amount of jobless benefits not fallen last year — it fell by about one-fourth, or $36 billion, from 2010 — last year’s poverty rate would have declined, said Arloc Sherman, a poverty and income specialist at the Center on Budget and Policy Priorities.

That amount of social safety net is likely to drop further this year and could head much lower if Congress doesn’t renew extended benefits. “That is a real concern,” Sherman said.

In past business cycles, the poverty rate had dropped after recessions and declines in the unemployment rate.

“The good news is that we’ve reached the bottom of the economic cycle, at least for the very bottom,” Smeeding said. But the ongoing problem is the “squeeze on the middle class.”

Recent studies have shown a growing share of new jobs are relatively low paying — one factor in the declining median incomes for middle- and lower-income groups. What’s more, studies have shown a polarization in job growth, with opportunities increasing at the top for professionals and at the bottom, with less and less in between.

The latest census report showed that households with incomes in the 20th to 60th percentile saw their share of overall incomes fall last year to 23.8 percent of total income. Meanwhile, households in the top 20 percent saw their share of the total pie climb to an all-time high of 50 percent.

“That’s trouble, that’s not healthy,” Smeeding said. For those in the middle, he said, “they’re frustrated. Things have happened beyond their control.”