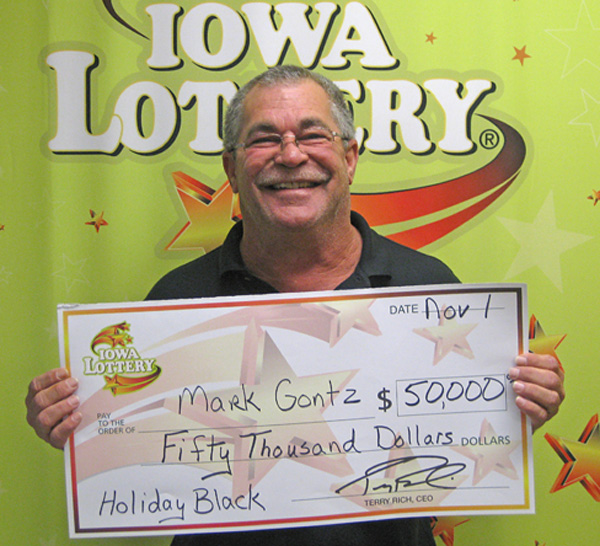 DES MOINES, Iowa – A Louisburg, NC man was making his regular stop in Clear Lake to pick up a shipment for his route as a tractor trailer driver when he discovered he won a top prize of $50,000 playing the lottery’s “Holiday Black” instant-scratch ticket.

Mark Gontz, 54, said he may not have even purchased a ticket if it hadn’t been for a schedule change.

“I got delayed because I can’t pick up my pickups until today,” Gontz said as he claimed his prize Thursday at the Iowa Lottery’s regional office in Mason City.

After learning of the delay, Gontz stopped into Shell Food Mart, 1302 N. 24th St. in Clear Lake to grab some dinner and play a few scratch games.

“I got my dinner, walked over and bought two tickets. The first ticket didn’t pay; the second one was a $50,000 winner,” he said.

Gontz had remembered playing the first version of the lottery’s “The Black Ticket” and said he enjoyed it, which is why he chose the Holiday Black ticket while in Clear Lake.

“I called my wife right away and she’s like, ‘Oh, great, we can pay off some things!’” Gontz said.

Gontz said he had a harder time believing the win than his wife, Nancy.

“Actually, I couldn’t believe it,” he said. “I had to go over to your little ‘check your card, your ticket’ and I scanned it like five times to make sure of it!”

Gontz said along with paying a few bills and putting some of the winnings in the bank, he plans to take Nancy out to celebrate.

“We’re going to go out and have a big dinner,” he said. “We’ll go to a fancy restaurant.”