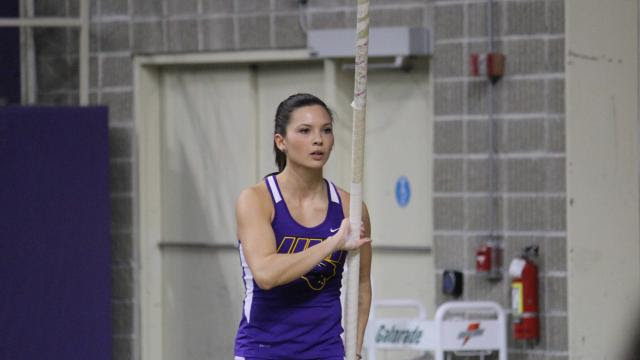 AMES – Junior Libby Torresani broke the UNI indoor pole vault record for the second time this season, highlighting the second and successful day of competition for the Panthers at the Iowa State Classic.

The Middleton, Wis. native vaulted a height of 13-02.25, breaking the previous record of 13-01.50 that she set on Feb. 1. The new personal-best mark placed her fourth in the competition and third in the Missouri Valley Conference.

Alex Wilson joined Torresani on the UNI all-time list, winning the women’s 3,000 meter race with the third fastest time in school history. Wilson finished with a time of 9:46.54, setting a new personal-best in the event by over 20 seconds.

Rounding out the Panther women competing in the 400 meter dash was Darian Samuelson who also set a personal record time of 56.82. On the men’s side, Jesse Davenport set an indoor PR of 48.23, placing second in his heat in the men’s 400 meters.

In the men’s 60 meter dash finals, Brandon Carnes placed fourth overall. He ran a time of 6.81, tying his personal-best time and keeping him first in the MVC.

Thomas Larson tied his personal-best height in the men’s high jump competition, placing fourth overall. His height of 6-08.75 placed him in the top-10 in the conference.

The Panthers wrapped up the ISU Classic with a men’s and women’s team in the 4X400 meter relays. The women’s team of Samuelson, Jones, Paige Knodle and Beeler ran the second fastest time this season for the Panthers, coming in at 3:46.52 while Davenport, Carnes, Marshall Hill and Ryan Newtoff notched a time of 3:17.27 in the men’s race.

UNI also sent a group of athletes to the Minnesota State-Mankato Open. The MSU Open was only a one day event, taking place in Mankato today.

Christine MacNeill got the Panthers started, coming in fourth overall in the 200 meters, notching an indoor PR time of 25.97. She also qualified for the finals in the 60 meter hurdles, placing second in the finals with a personal-best time of 8.72.

The Panthers also came away with two wins in the field portion of the meet with Sydney Rabon winning the women’s shot put and Corey Szamlewski winning the men’s pole vault. Szamlewski’s height of 16-06.75 was a new personal-best.

“I was happy with the way that our team competed this weekend,” head coach Dan Steele said. “The team really stepped up this weekend with several personal records being broken and we are continuing to gain momentum heading into the championship next month.”

The UNI track and field program will return to action Friday, Feb. 21 when they host the UNI-Dome Open.