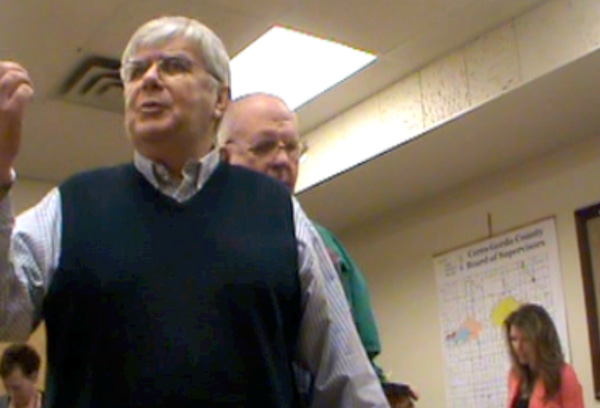 MASON CITY – On Tuesday morning’s regular agenda for the Cerro Gordo County Board of Supervisors, an agenda item that required a vote by the board was placed under the designated agenda item where the public is allowed to address the board.

Under the board’s agenda item “Correspondence & Communication” the public has been allowed to address the board, ask questions and receive feedback.

At Tuesday’s meeting, a sub-item was added to the agenda under “Correspondence & Communication.”  The agenda item, “Sexual Assault Awareness Month Proclamation” required a vote by the board.

As the agenda item “Correspondence & Communication” was called next on the agenda by Board Chairman Jay Urdahl, he noticed NorthIowaToday.com Publisher Matt Marquardt with his arm raised, waiting to be recognized.

Urdahl recognized Marquardt to address the board.

“I would like to talk about your lunch last week at downtown Mason City,” Marquardt said, referring to an incident last Tuesday where Urdahl and Supervisor Phil Dougherty accepted gift meals from a man and left the eatery without re-imbursing the donor.  NIT has since learned that Dougherty sent $20.00 to the donor to cover his share of the meal, which cost well over $80.00 including the tip.

Urdahl immediately proclaimed “that’s not on the agenda” and then called on the “Sexual Assault Awareness Month Proclamation” agenda item.  Sheriff Kevin Pals immediately began to speak and describe the program to the board.

Marquardt objected but the board and the Sheriff continued discussing the item for a number of minutes.

As their discussion waned, Urdahl joked to Sheriff Pals about Pals retiring as Sheriff as Marquardt again raised his arm and waited to be recognized.

Urdahl, for a second time, recognized Marquardt to to address the board.

Marquardt re-iterated his request to discuss the gift meal issue and Urdahl told Marquardt that he was interrupting the other “presentation.”

Urdahl then called on Sheriff Pals to begin speaking for a second time, and Pals pointed out a sexual assault proclamation document, which Urdahl then spent the next 2 minutes and 30 seconds reading.

When Urdahl was done reading, the board voted to approve the proclamation.

Marquardt again had his arm raised and waited for the board to recognize him.

Urdahl, for a third time, recognized Marquardt to address the board.

As Marquardt finished his sentence, Supervisor Phil Dougherty called for the meeting to adjourn, and Supervisor Bob Amosson seconded the motion, with Urdahl concurring.

“Excuse me I would like an answer.  How many more free lunches are you set for this week, sir?” Marquardt asked, as the three Supervisors laughed.

“What about you?” Marquardt asked Amosson.  Amosson consumed a free gift lunch purchased for him by Mason City Mayor Eric Bookmeyer on Wednesday, March 27th at the Mason City Public Library.  Urdahl ate the same free lunch that day.

“It was a good lunch!” Amosson proclaimed, in answer to Marquardt’s question.

“Was it a gift from the Mayor?” Marquardt asked.

“I hope so, it was a gift from the Mayor, he said he was gonna take care of it,” Amosson said.

“Are you going to pay back?” Marquardt asked Amosson.

“No I am not,” Amosson declared.  “It wasn’t anything that had to do with this,” he said, motioning around himself to the courthouse.

“It was on the agenda, sir, for the county courthouse,” Marquardt said.