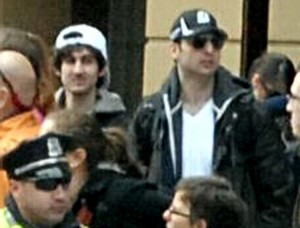 The FBI released a photo of Suspect 1 and Suspect 2 (L) in surveillance video from the Boston Marathon. Suspect 1 is now identified as now identified as Tamerlan Tsarnaev, 26, and Suspect 2 is his brother Dzhokhar Tsarnaev, 19, both of Cambridge, Massachusetts on April 19, 2013. Both are suspected of planting the bombs that killed three and injured 170 during the Boston Marathon on April 15, 2013. Tamerlan was killed by police on April 18, 2013 and Dzhokhar is still on the loose near Boston. UPI

The posters — featuring Tsarnaev and his mother, the phrase “not guilty” with a version of his story and an appeal for online donations — were first seen after Russia’s May Day celebrations Wednesday, the BBC reported.

Members of the Tsarnaev family are ethnic Chechens but have lived mostly outside Chechnya, a breakaway part of Russia.

The latest poster in Grozny claims the case against Tsarnaev in Boston is “a groundless accusation, there is absolutely no evidence against him,” the BBC said.