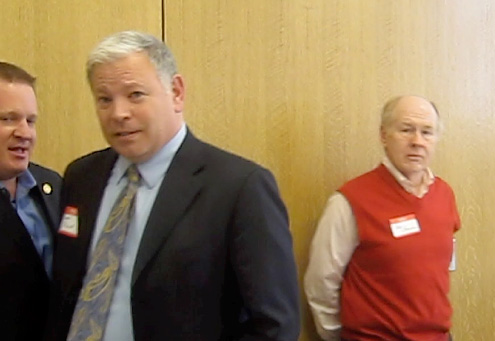 MASON CITY – NorthIowaToday.com has learned that Mason City Mayor Eric Bookmeyer instructed staff at City Hall to reserve a room for what was claimed to be his own personal use at the Mason City Public Library.

Despite the fact that the meeting was listed on the weekly agenda at the Cerro Gordo County Courthouse, City Administrator Brent Trout called the meeting “private” and said that the people of Mason City were “not invited.”

Even as Trout called the meeting private and not open to the public, he confirmed that day that Bookmeyer was “always the mayor” and as such was acting in his capacity as mayor at the meeting, dubbed a “mayors luncheon.”

During the meeting of public officials, Mayor Eric Bookmeyer instructed City Administrator Brent Trout to evict the media from the meeting room, which had long shades drawn over the windows and the door.

In the days that have followed, details of the “mayors luncheon” continue to emerge.

NIT has been informed that Bookmeyer paid for the meeting room out of his own pocket at a cost of $50.  He wrote a personal check to the library to cover the room cost.  Bookmeyer and Trout also claim that Bookmeyer bought all the food and drink that was consumed by the dozen or so guests in the room.

The state of Iowa has strict guidelines that public officials must follow when either accepting or giving a meal or gift with a value greater than $3.00.

Further, despite the fact that Trout and Bookmeyer claim that the meeting was private and fully-funded by Bookmeyer, NIT has confirmed from two sources – one at City Hall and one at the library – that Bookmeyer instructed City Hall staff to call the library and reserve the room for his use.  Why Bookmeyer did not make the call himself was not known.

Other state agencies are being contacted as well.

More on this developing story to come.