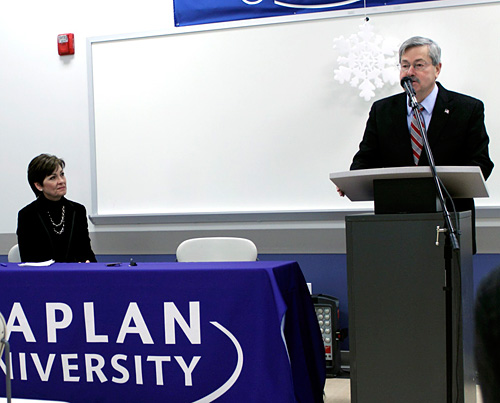 “Governor Terry Branstad has repeatedly deceived Iowans about job growth, claiming 100,000 jobs have been created, and did so again during his January 15 Condition of the State address”, Progress Iowa said on Thursday. “The Bureau of Labor Statistics (BLS) does not recognize the figures used by the Branstad Administration, and his claims have been widely criticized in the press and by independent economists. According to BLS recognized statistics, only 18,700 jobs have been created since Branstad took office in 2011. Governor Branstad is misleading Iowans in order to cover up his broken campaign promise to create 200,000 new jobs.”

In an op-ed published in the Des Moines Register on Wednesday, Branstad’s methodology was questioned in calculating job gain numbers.

“Gov. Terry Branstad’s claim that Iowa has added 100,000 jobs since January 2011 is nonsense. The number is based on an invented —and utterly invalid— measure of “gross over-the-month employment gains. This measure is calculated —and I am not making this up —but counting every monthly increase in employment in one of Iowa’s major sectors as a “gain” while ignoring all of the accompanying losses.”