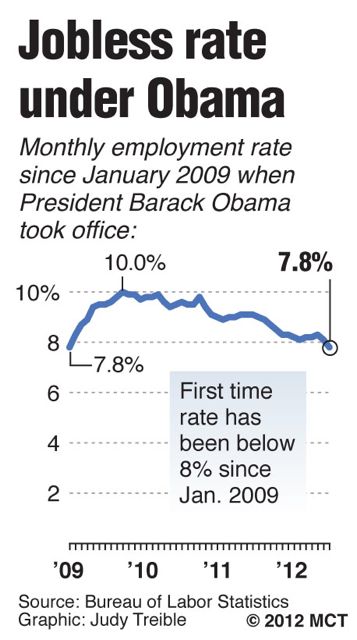 WASHINGTON — Critics charged Friday that the Obama administration cooked the books on the unemployment rate to help President Barack Obama. The charges are unfounded.

They were made by supporters of Republican presidential candidate Mitt Romney after the unemployment rate for September fell unexpectedly to 7.8 percent, the first time it’s dropped below 8 percent since the month after Obama took office. Former General Electric chief Jack Welch took to Twitter alleging manipulation of the data. He was seconded by U.S. Rep. Allen West, a South Florida Republican.

Their comments raised the questions of how the government comes up with the jobless rate and whether it could change the numbers. Here are some answers:

Q: The unemployment rate dropped sharply from previous months. How do we know it’s not manipulation?

A: Keith Hall, who until January was the commissioner of the Bureau of Labor Statistics, told McClatchy Newspapers that manipulating the data would be very tough.

“People shouldn’t think at all there is any bias in the numbers,” said Hall, who’s now a senior scholar at George Mason University’s Mercatus Center. “This data is collected and examined by each state. … Hundreds of people at BLS help collect this data and compile it. If you wanted to try to mess with these numbers, you are talking a very difficult thing. It almost certainly would … be next to impossible.”

Q: How can the jobless rate fall sharply if employers added only 114,000 jobs?

A: The two numbers come from different reports. Each has nothing to do with the other, and this is the source of confusion. The total of jobs comes from the establishment survey, a sample of 141,000 businesses. The unemployment rate comes from the household survey, a survey of 61,000 households across the nation. Because it’s a smaller sample, it can be more volatile from month to month.

A: No. The initially reported jobs numbers are always revised upward or downward as new information comes in. Revisions reflect a more accurate picture, not corrections of mistakes.

West seemed unaware of this when he suggested that all these revisions in recent months underscore the perception of cooking the books. The Bureau of Economic Analysis, part of the Commerce Department, calculates the gross domestic product — the broadest measure of trade in goods and services in the U.S. economy — quarterly and annually. It always offers a first estimate, followed by two scheduled revisions. And it has annual and semiannual revisions of its data as information such as the previous year’s tax returns becomes available.

Q: So there’s no politics at the BLS?

A: None apparent in data collection. Republicans have criticized the Obama administration for not renominating Hall, who became the commissioner during the Bush administration in 2007 and brought no controversy to the bureau. His job has been vacant since January. Obama nominated Erica Groshen, a vice president at the Federal Reserve Bank of New York, in February. A career labor economist at the Fed, she’s opposed by Republicans, accused in conservative blogs of being too liberal.