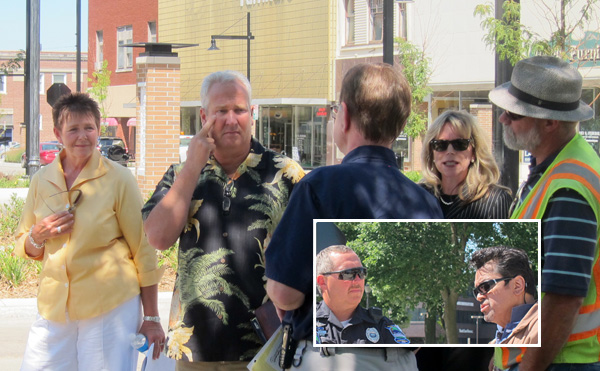 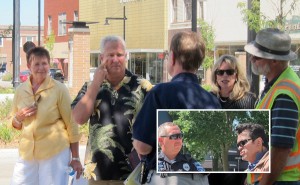 MASON CITY – The cultural crescent sculpture walk got off to an ugly start today in downtown Mason City.

The non-profit group that was awarded $40,000 of city tax dollars was busy picking out spots Tuesday afternoon at about 2:30 PM for seven of the sculptures that will be installed in a few of weeks.  City staff was on hand to give advice on locations; two of which will be in Central Park.  Eighteen more statues are coming later.  Chamber Director Robin Anderson, Main Street’s Marty Walsh, nearby business owners, and a man from the Sioux Falls Sculpture Walk were collaborating on selecting sculpture locations.

The group started in Central Park and then made its way up Federal Avenue’s east side to the corner of State Street, where they paused, and then walked into the pedestrian court at Southbridge Mall’s north entrance. 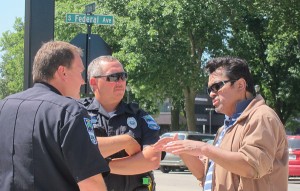 A Mason City man, Dennis Luna (pictured, bottom, speaking with MCPD officers), approached the group and accused Dr. Jay Lala, a dentist who is also part of the statue committee, of “ruining his teeth.”

Luna and Lala proceeded to have words, with Luna pursuing Lala.  Scott Moorman, who owns Moorman Clothiers, got between the two men and separated them.  Some of the group, including Lala, could be seen laughing after the incident.

Luna didn’t think it was funny.

“My teeth are ruined, and they think it’s funny,” Luna said.  “He took over $9,000 of Medicaid and refused to finish the work.”

Luna displayed his mouth, showing several places where teeth were missing.  “A dentist in Clear Lake is fixing this,” he said.

Mason City police were called, and everyone was questioned.  Members of the sculpture group said Luna threw a punch at Lala, which Luna denied.

Police took a report and left.

The sculpture walk continued, as Lala left, headed north in Commercial Alley towards his office.  A call there about 30 minutes later seeking a response from Lala was not immediately returned; his staff said he was not in the office Tuesday.

Luna stuck around to explain the incident on camera.  Watch it below: