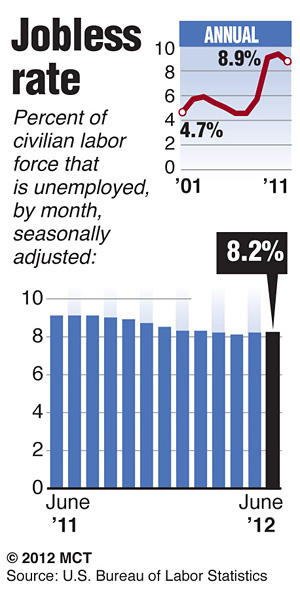 WASHINGTON — The nation’s job-creation engine is stuck in low gear, making businesses hesitant to hire enough workers to get the U.S. recovery on track again.

Gains in employment have slowed significantly as companies wait for improvements in Europe’s debt crisis and resolutions to the looming federal tax hikes and spending cuts.

And the lackluster jobs report is not likely to help President Barack Obama’s re-election prospects, though the recent economic slowdown has not hurt him in the polls yet.

The unemployment rate remained at 8.2 percent, as the slow but steady drop from the high of 10 percent in late 2009 has flattened.

The new data closed out the worst quarter for job growth in nearly two years, a dramatic drop-off from the winter that puts new pressure on the Federal Reserve to try to stimulate the economy. In April through June, the economy added a total of 225,000 net jobs — nearly the same figure the nation averaged each month in the first three months this year.

“It’s not surprising that companies for the past couple of months have been on the sidelines. They’re very apprehensive about ramping up hiring for the simple reason that the economic outlook is unclear,” said Bernard Baumohl, chief global economist for the Economic Outlook Group.

The private sector, in particular, recorded its lowest monthly job growth in nearly a year, even as the heavy government layoffs eased considerably. Only 4,000 net jobs were lost in the public sector last month.

Businesses are worried about hiring when the nation’s economic recovery is threatened with mounting financial problems in the eurozone, a looming global economic slowdown and a policy paralysis among Washington politicians.

Democrats and Republicans, for instance, are awaiting the results of November’s elections before dealing with the ominous “fiscal cliff” — the year-end expirations of the George W. Bush-era tax cuts and a temporary payroll-tax cut, as well as the prospect of deep automatic federal spending cuts if Congress does not take action to reverse that law.

If taxes jump and government spending tanks, economists predict the U.S. will sink into another recession in the first half of 2013.

“The uncertainty is worrying Wall Street, worrying business leaders and obviously it’s a great concern to consumers as well,” Baumohl said. Until they see those issues resolved, he said, businesses have little incentive to increase hiring.

With sales dropping 20 percent over the last two months, White said she had to dismiss her business manager and employ only a part-time worker to help her sweep the shop and arrange flowers.

He said he wasn’t satisfied with the unemployment report, but noted that June marked the 28th consecutive month of private-sector job growth. During that period, the private sector has added 4.4 million net jobs.

“That’s a step in the right direction,” Obama said.

“The economy is by far the greatest driver of election results, and so far it’s driving Obama to a dangerous place,” said Jack Pitney, a politics professor at Claremont McKenna College.

Private-sector job creation sputtered last month in the normally strong category of education and health care. The sector added just 2,000 net jobs in June after a boost of 44,000 the month before.

The biggest drop-offs were in child day-care services, which were down 7,800 jobs, and in physicians’ offices, which shed 3,400 jobs, according to the Bureau of Labor Statistics.

“The remainder of the private sector did not do bad,” said Sophia Koropeckyj, managing director of Moody’s Analytics.

June’s job growth was a slight improvement from May’s 77,000, revised from the initial report of 69,000. But the gain in May jobs was almost completely wiped out by a downward revision of April job creation to 68,000 from the initial report of 77,000. The result: An average of 75,000 jobs a month were added in the second quarter, not enough to keep up with about 125,000 people who enter the labor force each month or to start eating into unemployment.

“They’re not disastrous reports, but they’re not very good,” Nigel Gault, an economist at IHS Global Insight, said of the last few months.