More than 1,000 turn out in D.C. to protest Trayvon Martin’s killing 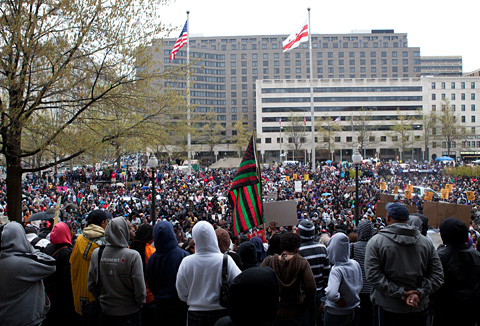 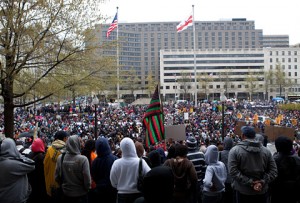 WASHINGTON — Supporters of 17-year-old Trayvon Martin gathered Saturday in the nation’s capital, continuing protests that have spanned from Miami schools to New York City and the city where he was killed in central Florida.

“Enough is enough,” shouted Akosua Tyus, president of the Washington, D.C., chapter of the NAACP. “Put your hoodies on, raise your fists.”

On a drizzly Saturday afternoon, more than 1,000 people gathered in the street in front of the Wilson Building, Washington’s city hall. Many attendees wore hoodies in his honor — the teen was wearing one when he was shot to death Feb. 26 after a neighborhood watch volunteer called Sanford police to report someone suspicious in his gated townhouse complex.

While Trayvon was returning from a walk to 7-Eleven to get Skittles and Arizona iced tea, George Zimmerman, the neighborhood watch volunteer, called police to report that he saw someone who looked suspicious.

Some at the rally bags of Skittles candy pinned to their hoodies; others carried Arizona ice tea. Among them was Rita Boston, 54, a retiree from Fort Washington, Md.

Trayvon was a junior at Dr. Michael M. Krop Senior High; he had recently been suspended for 10 days, and was in Sanford riding out the suspension at his father’s fiancee’s house.

Zimmerman, 28, told police he fired in self-defense after the young man came at him from behind and attacked him. He was not charged, sparking national outrage and protests, including the one Saturday in Washington.

Trayvon’s story is all too familiar to Cynthia Turner, 47, and Ardine Daniels, 42, friends who grew up together in Sanford and who now both live in Maryland.

“It was hell to live in Sanford,” Turner said, while Daniels described it as a city that hasn’t changed. “It just modernized,” he said.

Daniels told of being arrested and nearly having his neck snapped by an officer. Turner said that growing up, she was sexually assaulted by a white man who was never prosecuted.

“Thirty years ago, it happened to me,” Turner said of her hometown. “But I’m still here.”

Saturday, they wore black T-shirts they’d had made for the rally, emblazoned with a Skittles logo and an Arizona ice tea. On one side, the shirts said “I am Trayvon Martin,” and “No justice, no peace.” On the back, they said “Sanford native.”

Daniels said he admired President Barack Obama’s remarks Friday, when Obama said that if he had a son, “he’d look like Trayvon.” Daniels, who has five boys who still live in Sanford, said Trayvon’s death felt personal as well.

“This could have been my child,” he said.

Brothers Derrick Turner, 43, and Jamar Stancil, 25, argued about the impact of their attendance at the rally.

His younger brother, Stancil, corrected him: “We know his struggles. We don’t know his story.”

Regardless, they were there to be on the side of justice, Turner said.

“Him being so young, and not getting to tell his side?” he said. “Someone needs to stand up for him.”