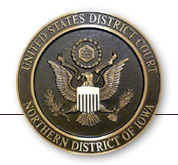 SIOUX CITY – A woman formerly of Klemme, Iowa who helped a North Iowa drug dealer murder 5 people in 1993 had her death sentence vacated this week.

Bennett filed a 448-page ruling Thursday where he outlined a series of mistakes Johnson’s lawyers made as she was about to be sentenced.  Those mistakes may have influenced the jury, Bennett found.  Read the ruling here.

The U.S. Attorney’s office in Cedar Rapids has 60 days to decide whether to appeal Bennett’s ruling.  Public Information Officer Peter Deegan had no comment when reached by NIT on Friday.

Nicholson, who had sold drugs for Honken, was the central witness in a drug case against Honken. The Duncans had the misfortune of being present when Honken and Johnson arrived at their home to deal with Nicholson. Months later, Honken, again with Johnson’s assistance, murdered a second potential witness against Honken, Johnson’s former boyfriend, Terry DeGeus.

In 1992, Honken started manufacturing methamphetamine with his friend Tim Cutkomp in Arizona. Honken’s brother, Jeff Honken, financed the operation. Honken distributed the methamphetamine to Greg Nicholson and Terry DeGeus, who were both drug dealers in Mason City, Iowa. In early 1993, during one of Honken’s trips to Mason City, DeGeus sent Johnson, who was his girlfriend at the time, to deliver either drug proceeds or methamphetamine to Honken. Johnson told Honken that because DeGeus was using too much of the methamphetamine for his own personal use, Honken should deal directly with Johnson instead. Johnson and Honken began a romantic relationship and within six months, Johnson became pregnant withHonken’s child. In late February or early March of 1993, Cutkomp moved to Iowa,but continued participating in Honken’s drug enterprise.

In March 1993, police began investigating Nicholson and executed a search warrant for his residence, which led to the discovery of a large amount of methamphetamine and money. Nicholson agreed to cooperate with law enforcement and told agents that Honken had supplied him with several pounds of methamphetamine over a period of 10-11 months, for which he paid Honken a total of approximately $100,000. On March 21, 1993, Nicholson met with Honken to deliver drug proceeds. During their conversation, which was monitored by police, they discussed past and future deliveries of methamphetamine. That day, police arrested Honken and Cutkomp. In Honken’s pocket, officers found a note listing money owed to Honken by two individuals referred to as “G-man” and “T-man.” A receipt for the purchase of chemicals was found in Cutkomp’s pocket.  After Honken was arrested, Jeff Honken disposed of items from Honken’s drug lab that Honken had kept in one of Jeff Honken’s storage sheds.

In April 1993, a federal grand jury indicted Honken for conspiracy to distribute methamphetamine. Honken was released on bond. Honken informed the court that he intended to plead guilty, and a plea hearing was scheduled for July 30, 1993.

During June and July of 1993, Honken and Johnson began searching for Nicholson. On the evenings they looked for Nicholson, Johnson would ask her friend, Christi Gaubatz, to babysit Johnson’s daughter. Honken and Johnson borrowed Gaubatz’s car on these occasions so that they would not be spotted by Nicholson. On July 7, 1993, Johnson purchased a semi-automatic 9 mm assault pistol at a pawn shop about an hour’s drive from her home.  The last time Johnson asked Gaubatz to babysit so that she and Honken could look for Nicholson was July 24, 1993. That evening, Nicholson, Nicholson’s girlfriend, Lori Duncan, and Lori Duncan’s two children, Kandi and Amber, were murdered.

Johnson later recounted the details of the murders to various witnesses.

The following recitation is drawn from these accounts. Johnson knocked on the door of the Duncans’ home and asked if she could look at their telephone book. Johnson was carrying a cosmetics demonstration bag and claimed that she had an appointment to give a demonstration, but was uncertain of the address. She secured entry into the house, with Honken apparently right behind her. There was testimony that once the door was opened, Honken and Johnson “rushed” the occupants. While Johnson and Honken were in the house, one or both of them videotaped Nicholson making statements exculpating Honken. At some point, Johnson went upstairs with Kandi and Amber and had them pack up some of their things – either to persuade the girls that they were going on a trip or to convince any subsequent visitors to the house that they had done so. Honken and Johnson bound and gagged the adults with materials that either Honken or Johnson had brought to the house and drove the victims to a wooded area. Honken took the two adults out of the car and shot them in the head while Johnson waited in the car with the children. The children were then taken out of the car and shot as well. All four were placed in a single grave that had been dug earlier. 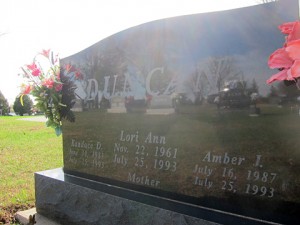 Their bodies were eventually discovered years later.  Lori Duncan and her two daughters, Kandi and Amber, are buried in Elmwood Cemetery in Mason City on Trinity Hill.

At this time, Johnson remains in a Texas prison.