This news story was published on August 15, 2020.
Advertise on NIT • Subscribe to NIT

RURAL PALO ALTO COUNTY, IOWA – A deceased person was found in a rural Northern Iowa lake in July and now a man has been arrested on first-degree murder charge.

On July 22, 2020 at 1:16 PM, the Palo Alto County Sheriff’s Office received a report from a passerby of a possible body in Virgin Lake, south of Ruthven, Iowa. Upon arriving at the east boat ramp in the 3700 block of 353 Ave, one body was observed 25 feet from shore. The Iowa Division of Criminal Investigations was called and the body was removed from the lake and transported to the Iowa Medical Examiners Office in Ankeny, Iowa.

The body was identified as 27-year-old Rollin J. Bontrager from Washington, Iowa. An autopsy was performed and a final report by the Medical Examiner’s Office will be released to law enforcement when final testing is complete.

On July 31, 2020, search warrants were executed at 2 residences in Emmetsburg, Iowa. Three vehicles were also searched. Numerous items were seized and will be analyzed.

Agencies assisting with the arrest were the Dickinson County Sheriff’s Office and Lake Park Police Department.

The investigation continues. Anyone that may have information concerning this incident is urged to contact the Palo Alto County Sheriff’s Office at 712-852-3535. 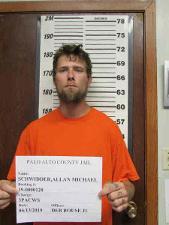