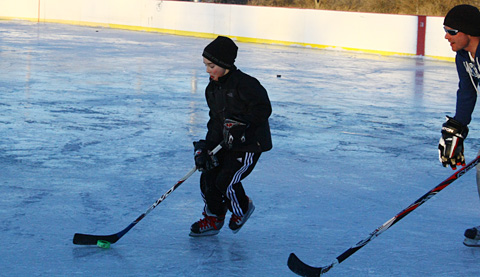 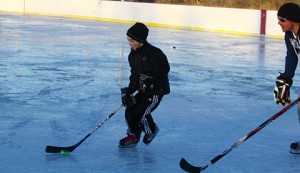 MASON CITY – Going by Ray Rorick Park, Sunday, we decided to do an update on Joe Buttweiler’s story from last Sunday, January 22.  Joe mentioned in that story that there was only one goal on the ice.

There are, at this time, two nets on the ice.  Whether someone brought one back, or another was bought or donated, is unknown.  Both the nets are on the south side of rink.

There were guys on the ice, practicing some hockey moves, just like the previous week.  “We’re out here playing a little hockey with what little ice there is.  It’s a bit separated on the other end of the rink, but it’s nice that they have it,” says Marc Blong of Mason City. 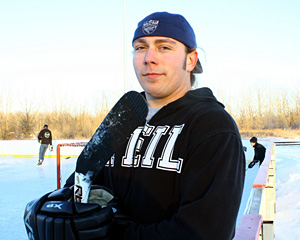 “It’s nice,” Blong (pictured) goes on, “just because it’s here.  It’s free and it’s good exercise.  It’s great to be able to do something outside of the house.  It’s good for the community; it’s available for all ages of skaters.  We even got the little guy out here today.”

Although the pictures only show hockey players on the ice, the ice is not limited, it is for everyone.  Anyone that wants to go skate for fun or for exercise, for something to do or to just get out of the house on a beautiful, sunny winters’ day.

Blong says, “It’s hard for them to do regular maintenance on the ice because of the change in temperature from day to day.  They come out here and even out the ice, but the next day it will melt and make it rough.  It’s okay though, as long as your careful.”

“Everyone that comes here to skate is really friendly.  I do go play at the fairgrounds on Monday nights.  That don’t start until 9:00 pm.  I have to play around my work schedule, so it’s nice to have some place else to go.  Especially since I love the outdoors,” says Blong.