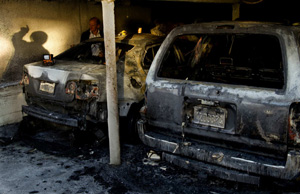 LOS ANGELES — The first call came in 25 minutes after midnight. A car parked in an underground garage in West Hollywood was engulfed in flames.

Then a third. And a fourth.

(PHOTO: Building maintenance workers attempt to restore water to apartments in Los Angeles, California, that were damaged after three cars were set fire on Friday, December 30, 2011. Police and fire officials are looking for information from the public about who might be responsible for setting a string of 19 arson fires in the Hollywoodarea.)

Fire crews rolling out to one scene could hear dispatchers on their radios putting out the details of another. It didn’t take long for fire officials to realize there was nothing coincidental about what was happening. They had an arsonist, or perhaps more than one, on their hands.

When dawn finally broke Friday, 21 fires smoldered throughout Hollywood and West Hollywood, making it one of the worst arson sprees in recent Los Angeles history.

Among the properties damaged was the Hollywood Hills home where The Doors’ Jim Morrison once lived and inspired his song “Love Street.” The night left Angelenos on edge and investigators perplexed as they began the painstaking search for clues on who had set the fires and why.

Nearly all of the fires started with a vehicle being set ablaze. Several times, however, the flames jumped to nearby apartment buildings or houses, causing significant damage at some of the locations.

Estimates on the total cost of the damage were not available, although officials from the Los Angeles County Fire Department said that four fires set in West Hollywood alone destroyed about $350,000 worth of cars and property.

One firefighter suffered back and neck injuries and was taken to a hospital. His condition was not thought to be serious.

Investigators and experts said the fires were highly unusual for even a serial arsonist because of the sheer number of fires in a relatively short period of time. Officials have not said how the fires were set or whether they believe one or more people are responsible.

Of particular interest was Samuel Arrington, a 22-year-old from Sunland. Arrington was arrested Thursday and charged with starting three fires that day along a stretch of Sunset Boulevard in the same area as several of the fires that erupted hours later. Arrington was never released from custody after his arrest and arson investigators questioned him Friday in search of some link between him and the fires set Friday morning, officials said.

“It’s too early to say whether we have a copycat,” said Jaime Moore, a captain in the Los Angeles Fire Department.

It is not unusual in arson cases involving an initial set of fires that is followed by another for someone completely unrelated to the first arsonist — a copycat — to set the second group.

An obvious fear was felt among residents and public safety officials alike that the person or people responsible would ignite more fires in coming nights.

Los Angeles Police Department and Los Angeles County Sheriff’s Department officials said they planned to deploy additional officers throughout the area and called on the public to keep watch for anything suspicious.

Staffing at city and county fire stations also will be upped. The city, county and federal Bureau of Alcohol, Tobacco, Firearms and Explosives put up a $60,000 reward for information leading to the arrest of the culprit or culprits.

“Arsonists often like to watch fires they set,” said sheriff’s Detective Ed Nordskog. “Someone likely saw something they may not think was important, but all clues are good clues right now.”

Fire and police officials described a night of mounting anxiety and helplessness as the calls piled up and the reality of the situation set in.

From 12:25 a.m. until shortly after 1 a.m., reports of five fires came in. Four were within a block or two of each other on residential streets off Santa Monica Boulevard near Fairfax Avenue. A fifth occurred about a mile north near Hollywood Boulevard.

An hourlong lull followed the initial barrage, giving firefighters a false sense of relief that the string had ended. At 2 a.m., the calls began anew. Convinced they were dealing with an arsonist, fire officials frantically started to map the fires in an attempt to find a pattern in their location and timing — all in an effort to decipher where the arsonist or arsonists would strike next.

The LAPD, meanwhile, went on a citywide tactical alert, meaning that officers remained on the job even after their shifts ended.

Although scattered over a wide area, the fires in the second wave appeared to occur within minutes of each other. One, for example, was reported at Morrison’s old home off Laurel Canyon Boulevard and then, a minute later, emergency dispatchers received word of another fire 3 1/2 miles away on Cahuenga Boulevard. Things were quiet again between 3 and 4 a.m., but then a final outburst of three fires erupted in a 10-minute span.

The distances between the locations and the timing of the calls seemed to indicate that either more than one person was involved, the fires were ignited remotely or people had been slow to report some of the fires.

“We’ve had nights … where there were three or four — someone was driving or walking around and setting (a series) of fires, but not something where they were targeting the community to this extent,” Rueda said. “This was highly unusual.”

Whatever the reason, the fires turned an otherwise normal night on its head for scores of people, who had to rush from apartments to flee from encroaching flames.

When Luisa Lopez awoke to a man shouting “Fire!” outside her apartment, choking, acrid smoke had already begun to seep in to her bedroom. As she and her two children left, the 45-year-old single mother saw her 2002 Toyota 4Runner ablaze in the carport.

“It was horrible,” she said. “Seeing the car was awful.”

Lopez said she now would need to rent a car in order to get to her job as a housekeeper in Studio City.

In addition to Lopez’s SUV, at least three other cars were badly damaged at the building and a thick coat of black soot covered the once cream-colored facade of the complex.

An apartment overlooking the carport sustained the worst damage — its windows shattered, pieces of furniture burned and the fire alarm melted.