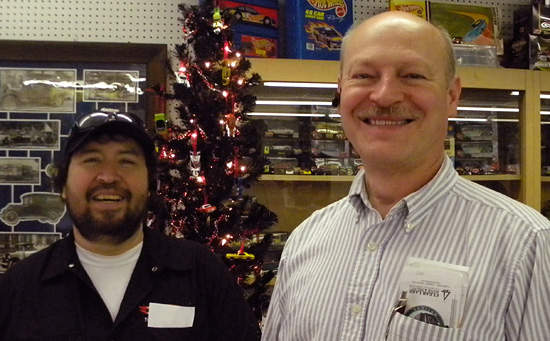 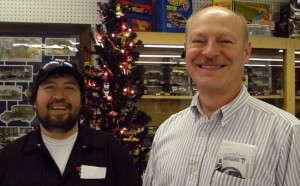 David Robles and Jeff Hansen (pictured, right) are Co-Presidents of the Top of Iowa Hot Wheels Club. Hansen owns Great Country Motors, making it a convenient place to hold the show. “We probably have about 40 tables here and the people are from all over,” says Robles.

Roble and his wife, Barb, are also members of All Iowa Hot Wheels Club out of Des Moines, which has around 100-120 members. “We are also part of a Newsletter Club,” explains David, “We do conventions in a lot of different places, such as Chicago, St. Louis, Washington DC, Detroit and California. California, that’s the Big One. That’s where Mattel is.”

The shows are a social event enjoyed by the regulars.  “These Clubs and Conventions are just like going to a family reunion. We have lots of fun. I met my friend Ellie Marchant at one of these shows,” says Barb. “We met and developed a strong friendship.”

Marchant gave some collecting advice. “Some of the people are awesome and from all walks of life. If I were to give advice, I would say, ‘If you’re buying Hot Wheels for your kids, buy two. Let them play with one, and keep one in the package. One day it could be college tuition.”

There were also other toy collectibles there like Barbie, Tonka, John Deere tractors, sports trading cards and tv show cards, and Nascar cards.